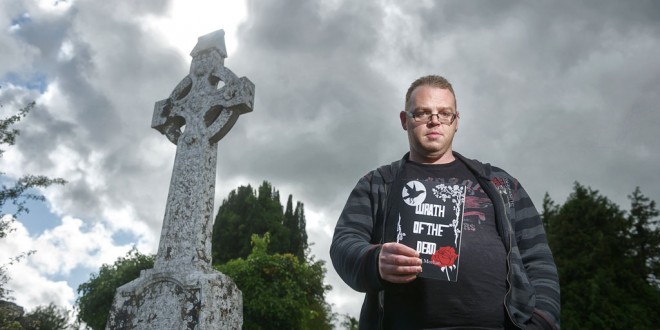 An Ennis man, who has overcome mental health difficulties, officially launched his second book in Brogan’s Bar, Ennis, on Friday evening.
Daniel Meehan, who suffers from schizoaffective disorder, found writing Wrath of the Dead to be a somewhat therapeutic and cathartic process.
Diagnosed with this disorder at the age of 18, the 36-year-old, who lives in Pound Lane in a housing scheme run by Cluaid, believes his new environment is also helping his ongoing recovery.
He is thrilled to complete his first novel, thanks to the development of his writing skills, which he finds to be a great coping mechanism for his condition.
In fact, he says that writing is always something he can fall back on if he is going through a tough time.
“The process of getting something down on paper helps me sort out all the jumble that is in my mind. It helps put a structure on my thoughts,” he said.
Liam Minogue, who established the Peer Emotions Centre in Ennis,  acted as Master of Ceremonies on the night, and the launch acknowledged the role this centre has played in the author’s recovery. Special guest was singer, Laura Mulcahy.
This is Daniel’s second book. His first was a poetry and short story compilation, entitled The Duality of Existence.
Daniel is currently working on the sequel to his latest novel, The Portals of Recollection, which is a more reflective and philosophical book but still with a lot of similar traits.
He is also putting together another poetry and short story compilation, called Shade of Dreaming.
Even though the subject matter of his latest book is generally quite dark, on its completion, Daniel is left with a “sublime sense of achievement” and now feels he is on a road that will define his life and worth as an individual.
Wrath of the Dead has been described as a dark fantasy novel. It centres on the exploits of a character, who remains nameless throughout to represent his bewildered loss of identity, which reflects Daniel’s own disillusionment with his life during the dark years.
The book is a collection of interwoven tales and surreal scenarios about a character who finds himself embroiled in a diverse range of escapades that force him to question every shred of his being and the very fabric of all he knew life to be. With his desperate endeavour to make sense of his ever-evolving surroundings, the subject becomes deeply immersed in a barrage of identities and the individual emotions that consume him dramatically.
The underlying theme is how the central character struggles to cope with his intense and rapidly changing emotions, dictated by the whim of an unseen force of a mysterious and immense power that seems to toy with him.
Another central theme running through the book is the romantic entanglement with Angel May. The main character’s constant drive and aspiration for the return to his state of bliss with his one true love, his soul mate, leads him from hope to despair and back again many times.
Daniel says his own fevered quest for his own soul mate has led him to many epiphanies and has shaped his ever changing set of beliefs and insights into the most peculiar regions of his mind.
Commenting on Angel May, he explained that she is not just one person but a combination of traits and personalities of the loves in his life, who had the most profound and lasting effect on him.
“I have come through some torrid moments in my life and, after many years of desolation, I am now glad to say I am happy. I feel I have so much to offer life and life has so much to offer me.
“I have drawn on aspects of my past and fantasies to dramatise and fictionalise my wide range of emotions and states of mind.
“Wrath of the Dead is a collection of stories tied together with the themes of love, loss, anguish, bewilderment and guilt, with hope flailing from elation to despair on many occasions,” he says.
“It is an exploration into my shadow side, a journey into the depths of my psyche.
“Through the process of writing this book, the untangling of complex patterns of thought, delusions and fantasies helped to create a space in my mind in which I could rest.
“As I wrote, I became embroiled in the words I conjured and deeply immersed in the characters my mind conceived.
“Through the completion of this novel, I have a focus and a clear view of my desired path in life,” he said.
Daniel is very grateful for the support he received from Employability Clare; proof-reader, Connie O’Neill and his friend, Sinead Nestor, artist and graphic designer, during the completion of this work