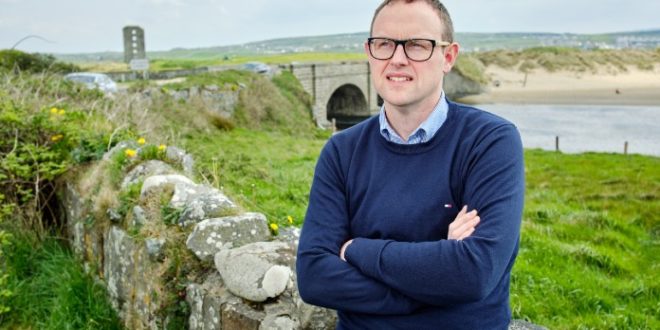 A SCATHING attack on the slow pace of repair works on local roads has been launched by an Ennistymon-based councillor.

At the January meeting of the West Clare Municipal District, Councillor Shane Talty described the Local Improvement Scheme (LIS) as “unfit for purpose”. The scheme involves the council drawing down national funds to repair privately-owned roads, and levying a contribution on those using the routes. According to figures given to Councillor Talty, the scheme has only addressed a fraction of the demand for works over the last three years.

“I’m sure that like myself, other members are inundated with queries and requests from people who have applications in under the LIS,” the Fianna Fáil member said. “These are applications that – as far as they’re concerned – are in there for years and they’re expecting that a response or a solution is only around the corner. At the current rate of progress, over the last three years, from the figures we’ve received, you’re looking at 20 years to clear the existing backlog of roads, so clearly the scheme is unfit for purpose.”

Data given to Councillor Talty show that between 2018 and 2020, 23 LIS projects in West Clare were carried out, out of a county-wide total of 34. With up to 200 applications in progress from the district, the Ennistymon man described the situation as frustrating.

“This reply should be forwarded to our Oireachtas members to make clear to them the picture in our municipal district,” he said. “It’s a hugely beneficial scheme and a very important scheme, but as it stands at the moment, it is absolutely dead in the water. We’re doing ten a year. There’s 200 applications in there in this district, and on each of those roads you could have up to ten properties and landowners affected. All of those are making regular contact with ourselves, hoping to see that their road will emerge on the programme for next year. The reality for the vast majority of them is that, under the  scheme as it is currently constituted, they’re going absolutely nowhere.”

Seconding the motion, Councillor Joe Killeen said that where people had been lucky enough to access the scheme, it had been very successful. “People obviously pay a contribution locally to the cost of the road, but the quality of work that’s been done by Clare County Council is of a very good, superior standard and people have been very happy with it,” he said. “Extra funding needs to be made available and I agree that the motion needs to be forwarded to our Oireachtas members and to the minister to see if extra funding can be put forward. We get phone calls all the time from people who didn’t qualify and whose roads have now dis-improved, sometimes to a great extent.”

John O’Malley Senior Executive Officer (SEO) point out that it was one thing to get funding, but the big challenge was to get the work done. “As we said, we’re half of the county, and we have a programme of works, a Road Works Programme that we have to get done in itself, and then we have these LISs on top of it,” he said. “If we introduce more LIS projects, it just creates more challenges for us. I know it’s worthy and it’s work that people need to get done, but we need to be aware that it adds to workload and the challenge that’s there in terms of getting work done.

Councillor Ian Lynch acknowledged the struggle to get LIS works done but said that some of it could be sub-contracted. “We should be looking at this very seriously,” he said. “If we can stimulate the local economy by sub-contracting that work, we could make sure the money stays locally.”

Fiona McGarry joined The Clare Champion as a reporter after a four-year stint as producer of Morning Focus on Clare FM. Prior to that she worked for various radio, print and online titles, including Newstalk, Maximum Media and The Tuam Herald. Fiona’s media career began in her native Mayo when she joined Midwest Radio. She is the maker of a number of radio documentaries, funded by the Broadcasting Authority of Ireland (BAI). She has also availed of the Simon Cumbers Media Fund to report on development issues supported by Irish Aid in Haiti. She won a Justice Media Award for a short radio series on the work of Bedford Row Project, which supports prisoners and families in the Mid-West. Fiona also teaches on the Journalism programmes at NUI Galway. If you have a story and would like to get in touch with Fiona you can email her at fmcgarry@clarechampion.ie or telephone 065 6864146.
Previous Clare host for virtual Féile Bríde event on Saturday
Next Safety works for Cranny Cross