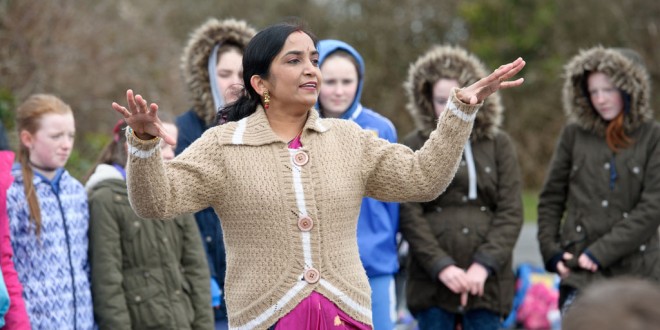 Corofin Scoil Mhuire pupils are given a Yoga class by Mrs Aparna Shukla, board member of the Ireland-India Council, after they collected water from Lough Atedaun. Photograph by John Kelly.

Pupils in Corofin National School brought together a range of diverse themes recently when they invited members of the Ireland India Council and the India Embassy in Dublin to take part in their Walk for Water.

A week of celebrations before the Easter holidays marked India Week and the pupils’ Active School and Green Flag endeavours.

Partha Ray, First Secretary at The Embassy of India, Dublin and Mr Ray’s wife, Temina, took part in the school’s celebrations, as did Prashaut Shukla, director of the Ireland-India Council and board member Aparna Shukla.

The group spent two days in the school teaching the pupils about Indian culture, history and heritage.

Guests from the Ireland India Council and the Embassy took part in the Walk for Water alongside the school community, as part of Scoil Mhuire’s Water Action Day for their Green Flag.

The group walked from the school to Lough Atedaun where they filled bottles of water and walked back to school. The idea was to highlight the daily walk for water that many children in developing countries have to make every day. The water collected was brought to the school’s water butt for use around the grounds.

On Friday, pupils were treated to a variety of Indian food prepared by Tony O’Connell. Pupils were also treated to Indian music with a visit from Mattha Noone and members of the Nepalese community.

The school was decorated Indian style by Fiona Guiheen.

Principal Geraldine O’Loughlin said spirits were high in the school after their experience.

“All in all, it was a huge success and a wonderful opportunity to open children’s minds to other cultures,” she concluded.