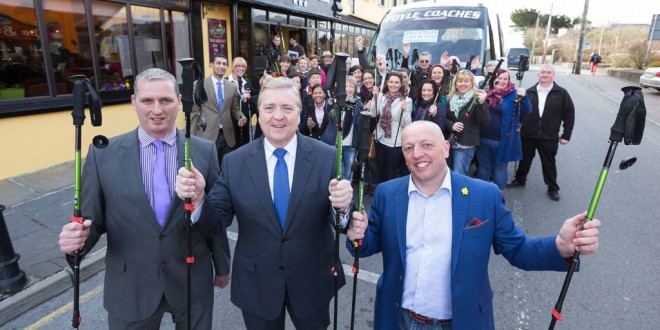 Thousands of Germans to visit Clare

A CLARE hotel is to bring thousands of German visitors to the county between now and October, resulting in 60,000 additional bed nights here and 211,000 nationally.

Whites Hotel Group, which owns the Hydro Hotel, the Imperial Hotel and the Burren Castle Hotel in Lisdoonvarna, as well as hotels elsewhere in Ireland, announced this week that it is to bring 5,500 German tourists here this year, as part of one agreement with a tour operator filling 25,000 bed nights in Clare and one with a different tour operator, which will result in 35,000 more in the county.

Marcus White, the man behind the deals, said while this is great for the Whites Group, it will also have benefits for other businesses.

“There is a great spin-off for the economy because we use the Aillwee Caves, Kilmacduagh, Loop Head Lighthouse, The Vandeleur Gardens in Kilrush, we bring them to visit Ennis town and spend some money there. This will create jobs.

“It extends the tourist season from March to the end of October and I am trying to set up a meeting so that we could bring people into Shannon Airport next year, possibly in conjunction with Aer Lingus. We are trying to promote this area and grow numbers into Shannon,” he told The Clare Champion.

“This German tour operator has given our company in Ireland over €50 million over nine years and that includes paying guides, paying for coaches and so on. That means it is worth well over €90 million in total to the economy,” he added.

A group of walking guides from Germany were in Clare last week on a familiarisation trip and Mr White invited local TD Pat Breen to Lisdoonvarna to launch the initiative.

“We have invented a programme for Clare and in that we are bringing in 5,500 walkers into this area from March until the end of December this year. The numbers are confirmed and deposits are paid so that is guaranteed. It equates to 25,000 bed nights in Clare and a further 10,000 bed nights in Dublin because they spend a night there when they arrive and one before they go back. That is 35,000 bed nights for the Irish economy.

“The groups use Clare as their base for five nights. The reason they are coming to North Clare is that the German operator was so taken with the Cliffs of Moher and keeps talking about the great pollution-free air in the country side and he loves it,” Mr White explained.

The programme for the German tourists will go from the Cliffs of Moher to Hags Head, a walk of Mullaghmore and the Black Head walk in Fanore.

“The walking tours is one programme. We also have an East-West programme, which equates to 30,000 bed nights in Clare,” he added.

Mr White describes the hotel group as “the Ryanair of hotels”. He believes business is out there for Clare tourism companies if people seek it out.

“In rural areas, we are crying out for tourists, in North Clare, in Loop Head, in the Gaeltacht. There is a spin-off for everything when we get the people here for sweet shops, Spar shops, for everyone.

That supports the local schools, the local post offices, the local services. Business is simple; make the right contacts, shake their hand, do the business with them. German business is on the rise and if it is done the right way, there is more business there if you go out and get it. You have to be a mover and shaker for it,” he outlined.

However, he added that the tours would not be possible if not for Clare County Council officials and Deputy Breen, who he described as “instrumental” in the process.

“We are a three-star superior wholesale business. Companies like ours need help. They need support. We are a volume business. We are the Ryanair of hotels in Ireland,” Mr White said.