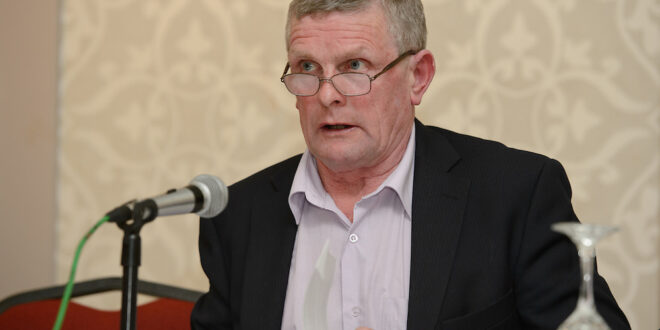 Outgoing chairman of Clare GAA Joe Cooney has been praised as being a “tireless worker” for the Association in the county as his term of offices came to an end.

The O’Callaghan’s Mills clubman oversaw his fifth and final Convention in the chair this week, having taken over the reins in 2016. In total, he has spent a decade on the executive having been elected as vice-chair in 2010.

Several delegates put their thanks for his work on the record, with fellow clubman Neil O’Brien outlining his hopes that he would continue to be involved in some capacity with Clare GAA.

Secretary Pat Fitzgerald also paid tribute to Mr Cooney, and praised the “enormous work” he had done. He said that he was always available day or night, and that whatever was needed to be done was always done.

He thanked him for always being courteous to “me and my family”, and said that he could best be summed up by saying that “no journey was too long, no task was too onerous and no problem could not be solved”.

He echoed the sentiments that he hoped Mr Cooney would not be lost to the Association in Clare and expressed his hope that he would remain involved in some committees.

Previous Fitzgerald Hints At Term As Clare GAA Secretary Running Until 2023
Next Gallagher: “The Well Is Now Dry”