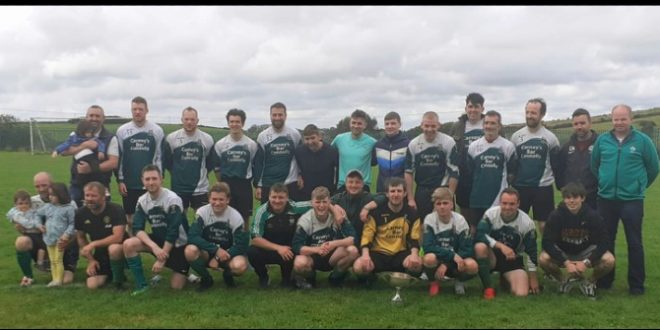 There were champions crowned in the Third Division of the Clare League this week where Connolly Celtic marked their return by clinching the title.

They added that to their league cup success earlier in the season.

It came after a 2-0 win over Ennis Dons with both goals coming from Brendan Dillon, and manager Ray Kennedy was delighted to get his hands on the cup.

“It is a proud moment. At that start of this year our aim was to build for the years ahead and hopefully get up the divisions while building our panel. We wanted to build a squad that would not always be relying on the hurlers so we went about doing that. We got two cups at the end of it so we are happy out with that. There are a lot of players there who have played in higher divisions and we got a few new players in this year and it is good to have that. The talent is there and it has always been there so it is just about getting them together. Inch Crusaders are there too so it is hard to keep two teams going along with the hurlers too so it was good for us to get new bodies in. We were consistent across the season and only lost one game all year which was against Inch. We are still in the Clare Cup too and we beat Newmarket B so that was a great moment for us. It was the best game we have played and we have drove on from that”, he said.

It came after Connolly Celtic had taken a year out from the League but Kennedy is hopeful they are now building for the future.

“We won the Second Division and went up. We managed to stay there for a season but then we had the year out. We made a few calls along with my brother Paul and we got few of the lads who would have played with the club at underage level back involved. Getting those lads back playing with us was nearly our biggest achievement. We have a good group of lads with us and hopefully we can keep going for the next few years. We have the Clare Cup now to focus on for the next few weeks and we will be looking forward to that”, he outlined.

Elsewhere this weekend, Bridge United’s Youth side will be bidding for more history when they host Cork outfit Douglas Hall in the semi-finals of the FAI Youths Cup.

The Bridge booked their spot in the last four for the first time with an impressive win on the road last time out and will be looking to their sizeable county contingent to carry the fight.

That one takes place in Sixmilebridge on Saturday at 2pm.