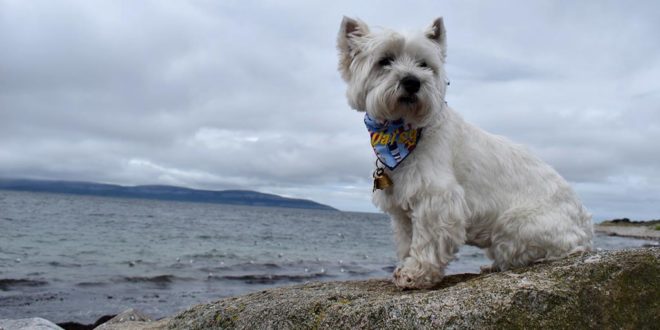 Daisy enjoying the view over Galway Bay toward the Clare coast.

What a great weekend. I knew something was up when I saw the case coming down from the attic. I haven’t seen that since before the lockdown. I hoped I was going to be included, even though I love going to my dog-minder and I was reassured when I saw my bag being packed too.

I knew we were heading North and I suspected we were going to one of my favourite places, The Twelve Hotel in Barna and I was right.

As soon as I came in the front door it was like I had never been away as I was greeted by name before going to the dog concierge area to get my picture taken. I never get tired of posing.

We just had time to look over our lovely room and have a quick stroll before it was time to go down to the bar for dinner. The Twelve is one of those enlightened places where dogs are welcomed and not just allowed so I found a lovely corner under the table from where I could keep an eye on all the goings on. I hoped someone would drop a pizza in front of me but it didn’t happen.

We were back the following day for breakfast and I fell in for a little corner of ham – don’t tell my vet! The rest of the day was spent just lazing around, reading and chilling although in my case it was chilling only – I love spending the day just snoozing and doing nothing – it’s my idea of a holiday.

Unfortunately, due to this Covid thing, I wasn’t allowed into the West Restaurant that evening for dinner. It’s a shame but it’s just something I have to accept. I could smell the lovely aromas from there every time I passed up the stairs. I’ll have to get back somehow.

The following day we were up early to do a bit of touring around Connemara but we were hardly out of the hotel when I heard a bang and one of the windscreen wipers disappeared. It was raining, so we had to stop and check things out. The wiper in front of me was fine but the one in front of that twirly thing wasn’t there so we were in trouble. Since I could still see out, I offered to bark directions. One bark for left, two for right and three for STOP RIGHT NOW!! Maybe it was best that nobody took me up on my offer. Instead, my human called the AA who made a temporary repair to get us home but it was another lazy day looking out at the rain.

That night we were back in the bar and I was presented with my very own pet menu. It was hard to decide from among all the delicious choices but I had already eaten so I just chose a starter of Pup Cakes, delicious Bonios smothered in peanut butter sauce. Delicious! I was licking sauce off my whiskers hours later.

It was as we were checking out though that my best moment happened. We’ve booked to return later in the year but there’s a problem with a dog-friendly room on one of our nights. One of my friends in management offered to take me home that night if they can’t find a room. How lovely is that and doesn’t it pay to be a well-behaved and friendly doggie at all times.

I can’t wait to go back to my home away from home.