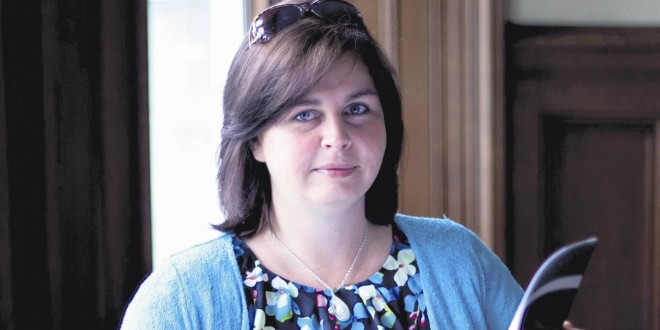 WHEN it comes down to it, we’re all heading in the same direction; we’re all on the same journey and, sooner or later, we’ll all end up in the same place.

As Benjamin Franklin put it, “in this world, nothing can be said to be certain, except death and taxes”.

We’re prepared to talk about taxes: income tax, capital gains tax, DIRT tax, PRSI, the USC, property tax, VAT and the latest tax, water charges – but very few of us want to talk about the other thing.

There is one person though who doesn’t mind talking about death. Dr Kathy McLoughlin, project co-ordinator of Compassionate Communities in Milford Care Centre (MCC), is encouraging us to begin talking about death and to ‘Think Ahead’.

And she wants communities and neighbours and, indeed, all of us, to help her to do away with the fear and stigma that surrounds our final departure; to develop a healthier attitude to dying and death.

The Shinrone, County Offaly resident was recently awarded the 2014 CMG Irish Healthcare Person of the Year. Born in Wimbledon, Kathy has been here since 1998 and did her PhD in Psychology at NUI Maynooth. Her interest in palliative care began in 2002 when, as a researcher in the area of mental health, she was asked to undertake a palliative care needs assessment for the Midland Health Board. Her studies revealed a lot of fear and a stigma that surrounded palliative care in the Midlands.

“Palliative care there at the time was community-based and the fear that surrounded the service tended to have patients avoiding it, not talking about it and when they did receive it, many asked the homecare nurse to park their car around the corner, as they didn’t want the community to know they were receiving the service.
“Of course, once they got into the service they recognised they should have been started in palliative care months before. Their quality of life improved, symptom control was better and they got much more support,” she said.

Following her experience in the Midlands, Kathy received funding from the Irish Hospice Foundation and the Health Research Board for her PhD research project in 2006, to look specifically at the fear and stigma around palliative care and to see if it could be changed somehow.

At the time, MCC was the only hospice in Ireland with a consultant-led multidisciplinary hospice at home team and it was very important that she could do her research in an area where palliative medicine supported the importance of her work. Milford already had a strong background in qualitative research and the organisation’s willingness and openness also convinced Kathy that MCC was the best place for her to continue with her study.

“The study showed there is a lot of misunderstanding by people and a lack of knowledge about what palliative care is. They were frightened of it. A lot of people equate palliative care with death. ‘If you receive palliative care, then pretty quickly afterwards you’ll die’. This isn’t necessarily the case and many people are receiving palliative care for several years. What people don’t realise is that it can make such a difference in improving our quality of life, at the end of life. It can help with pain and symptom management, provides an opportunity for a person to receive more social support and gives space for reflection on spiritual and emotional issues that we may want to explore when faced with a life limiting illness. The service is person centred, so it aims to meet the unique needs on a person and their family. That’s so important, whether it’s at home, in hospital or in Milford Hospice,” she explained.

While completing her PhD project, Dr McLoughlin took on the role of head of education and research at MCC and began to develop the Compassionate Communities model with her colleagues in the social work department, before moving to the Irish Hospice Foundation for two years. She’s now back at Milford again co-ordinating the internationally recognised Compassionate Communities project, the only one of its kind in Ireland.

The Compassionate Communities Project wants people to think a little differently about death.

Kathy says, “Death, dying, loss and care is everyone’s business. They are issues that affect all of us. They are difficult subjects but research shows talking about them can help”.
Following two pilot studies with the communities of northwest Limerick City and Newcastlewest, Compassionate Communities is now up and running all across the Mid-West, through a triple call to action of Think Ahead – Talk Together – Lend a Hand. The project urges people to Think Ahead personally about what they would like for themselves at the end of life, talk together with friends and family about their wishes and preferences and to lend a hand by supporting people within their own community who are living with a life-limiting illness, caring for others or experiencing bereavement.
The Compassionate Communities Project has so far worked in partnership with over 180 organisations and voluntary bodies, has facilitated cafe conversations on issues to do with death, loss and care, provided matching seed funding for community-led projects, trained statutory and community groups, including teachers and the gardaí and is now developing a model of social and practical support for people living at home, in their last year of life.

The project has found that when they start the conversation, people do want to talk about death, dying, loss and care. The project team have developed leaflets and films, to help people start these difficult conversations.

Compassionate Communities has a call out now for community volunteers and groups prepared to help in this partnership approach, to form a good neighbour partnership – where communities work together to help people living at home get the small tasks done – cutting the grass, taking the dog for a walk, collecting some shopping and other little jobs.

A meeting of all interested community organisations will be held on Tuesday next at 2pm in Milford Care Centre, Castletroy. If you interested in volunteering, contact Kathy by email k.mcloughlin@milfordcarecentre.ie.

The work also continues in communities and the Compassionate Communities project will be in Monaleen GAA Club along with the Mobile Irish Pub, as part of the Limerick City of Culture on the evening of Thursday, August 7, to discuss and promote the project and to explain the Think Ahead initiative.

Kathy says, “The community of the Mid-West has been so supportive of the project, and of all the work Milford does.”

This is particularly evident at the annual harvest fair, which takes place at the UL Arena on Sunday, August 31, from 11am to 4pm.
For more information on CCP, see www.compassionatecommunities.ie/ or http://www.milfordcarecentre.ie.