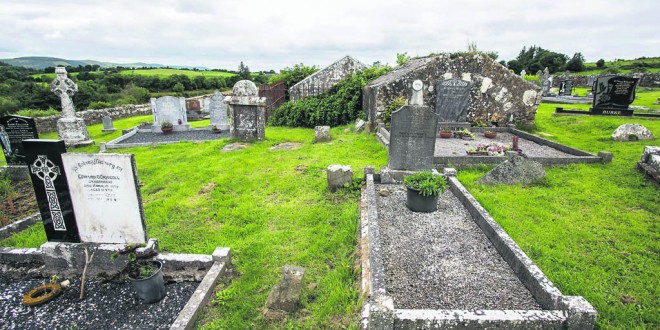 PLANNING permission has been refused to extend Kiluran Graveyard in O’Callaghan’s Mills, arising from the discovery of “significant archaeological features” at the site.

The Kiluran Graveyard Committee submitted an application to Clare County Council, seeking to extend the existing graveyard, which is presently accessed by a right-of-way from the public road, with all associated site works, in February of this year.

This week, Clare County Council refused the application on the basis that “it is considered that to permit the proposed development would injure or interfere with the historic remains and setting of the adjoining archaeological monuments”.

On the file, Clare’s architectural conservation officer and archaeologist, Risteard Ua Cróinín, outlined that the existing graveyard is a recorded archaeological monument as an ecclesiastical complex. He highlighted that this complex included the remains of a medieval church, medieval graveyard and bullaun stone.

He explained that under the Monuments Acts 1930 to 2004, no development may take place near the monument without the written permission of the National Monuments Service of the Department of the Arts, Heritage and the Gaeltacht.

Further to this, Mr Ua Cróinín outlined that having studied the archaeological assessment carried out on-site, he noted “significant archaeological features” at the site. These included ring ditches, post holes, pits and iron slag, which have been discovered on or near the site.

The Department of the Arts, Heritage and the Gaeltacht made a recommendation that planning permission be refused. It advised, “The department has reviewed the archaeological report received as further information. The results of the archaeological test excavation programme clearly show that there are substantial archaeological remains present within the area of the proposed development.

“The assessment of the development site also takes into consideration the geophysical survey that was previously carried out to the south of the present graveyard. The evidence recorded also shows the presence of a substantial ditch feature that encloses the site of the church and the earlier graveyard.

“This is interpreted as an ecclesiastic enclosure. Such enclosures generally denote the presence of an early church or monastic foundation and, as such, may be considered to be of national importance.”

According to the department, national policy states, “There should always be a presumption in favour of avoiding developmental impacts on the archaeological heritage.”