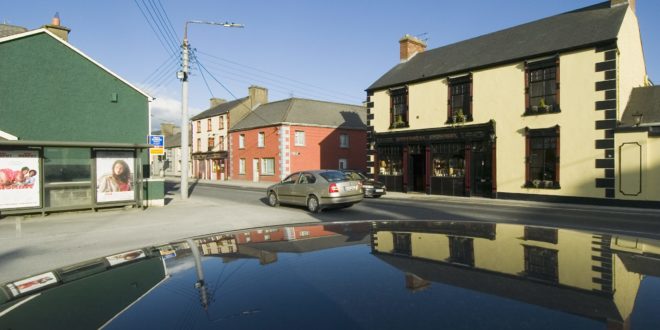 THE village of Clarecastle is set for a €200,000 makeover which is hoped will bring an economic boost to the local area. Public consultation has begun for the proposed Town and Village Renewal Scheme which will be mainly centred in the heart of Clarecastle.
Among the planned improvements will be the inclusion of street furniture and sculptures, traffic calming and landscaped areas. It is anticipated that these works will have the potential to encourage new businesses to set up in Clarecastle, giving a much-needed shot in the arm to the local economy following Roche’s decision to close its plant there.
Local councillor Paul Murphy has described the works as a “positive move” for the village. “These proposed works will enhance the centre of the village and it is hoped that this will make the village more attractive to businesses. There are some vacant units here and these works, which will increase the attractiveness of Clarecastle, will have the potential of encouraging retailers to set up here.
“Clarecastle is already a very attractive village, we have a lovely cafe and lots of great businesses operating here. However, this scheme will make Clarecastle even more vibrant and more inviting to potential investors. I’d like to see Clarecastle compared to the likes of Ennistymon, another small village which has a fantastic vibrancy about it and I believe that we can get there.”
He added that as part of the plans Irish Water will be carrying out important work diverting the sewer line away from the Quay and onto Clareabbey for treatment. This will prevent raw sewerage from going into the river at the Quay.
Under the project the works, if given the go-ahead will involve: narrowing and realignment of the existing carriageway using limestone kerbing; provision of uncontrolled crossing points including all dished kerbs and tactile paving; lowering of carriageway levels and removal of existing stepped retaining walls; reconfiguration of existing carpark; extension of existing paved areas; provision of street furniture (seating, bollards and sculptures); provision of all associated signage and road markings; provision of additional storm drainage and provision of landscaped areas.
“The majority of these works will be carried out in the village core at the junction area of Main Street, Patrick Street, Quay Road and Barrack Street and will come on the back of the €200,000 that was awarded from the Town and Village Renewal Scheme last October. These works will complement the works carried out in recent years which included the grounding of overhead cables and laying of paved footpaths on Main Street. Irish Water will also be laying a new main sewer line diverting raw waste from the Quay Road pumping station up to the Clareabbey treatment facility and I expect these two projects to complement each other accordingly.”
He added, “ I want to give credit to Clarecastle Community Development Limited for their work to date on this ongoing project and they have received great support from the Rural Development Directorate in Clare County Council as well as the Roads Department of Ennis Municipal District. My party colleague, Deputy Joe Carey deserves to be commended for his diligence to date also.”
Plans and particulars for the proposed scheme as shown on drawing numbers MDE-19-019-O1A to MDE-19-09A are available online at http://www.clarecoco.ie until Monday, April 27. Objections or representations in relation to the proposals may be made in writing to Administrative Officer, Clare County Council, Roads and Transportation Department, Aras Contae an Chlair, New Road, Ennis, County Clare before 4pm on Monday, April 27.