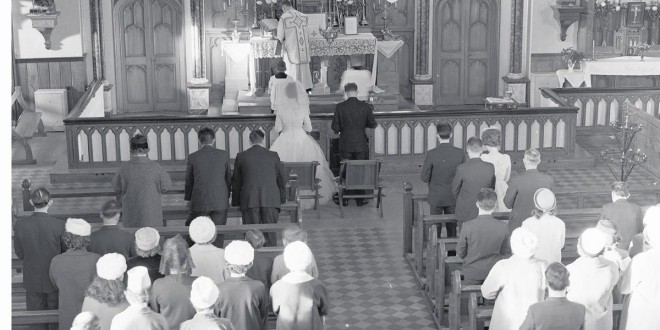 A Higgins family wedding in 1964. Photograph by Paschal Brooks

The parishioners of Clarecastle will celebrate the 175th anniversary of the construction of  the Church of Ss Peter & Paul on this Sunday. A special mass at 12 noon will be the focal point of the occasion and there is an open invitation to everyone to attend and hear Dr Joe Power outline the history of the church.

Construction of the chapel was begun in 1839 to replace a much smaller thatched chapel, which lay about 100m to the south-west of the present church. The work was instigated by the parish priest, Fr Patrick O’Gorman, who came to the parish in 1834.

The plot of ground upon which the church stands was donated by the Protestant landlord, Mr Patterson, in 1839. Other Protestants living in the parish, such as Mrs Stamer of Carnelly, who gave £60, also donated generous sums to the building project. The walls and roof of the building were completed in 1841 and in October of that year, Fr O’Gorman announced that a fundraising charity sermon would be given at the chapel by the well-known preacher, Fr M Murnane of Limerick.

The new chapel was dedicated to the patron saints of the parish, Peter and Paul. It seems that only the shell of the building was completed in 1841. There were other financial demands on the parish, such as building a new chapel in Ballyea and also new national schools in Clare Castle and Ballyea.

The Famine also delayed the completion of the work and Fr O’ Gorman was a victim, as he died of famine fever in 1847 and was buried in the main aisle. Fr Michael O’Gorman, PP, arranged for the erection of an ornate wooden altar and reredos in 1855.

In 1885, a chalice was donated to the church by an anonymous donor. Other donations were made by the O’Brien family of Bridge House, Clare Castle, who presented a set of oil paintings of the Stations of the Cross, a monstrance and a sanctuary lamp. Towards the end of the 19th century, a wooden floor was laid down, along with tiled aisles and seating.

Much of the carpentry work was done by local tradesmen such as Michael Moloney and Stephen Neylon. In 1927, Mary Anne Slattery presented a stained glass window by the renowned artist, Michael Healy. This beautiful window depicts three scenes: Veronica’s Towel, Christ Meets His Mother and Ecce Homo.

In 1954, a Marian shrine and a Calvary scene were erected outside the church. Following the Vatican Council of 1962, several internal changes were carried out. The old wooden altar, surrounding railing and reredos were removed in 1966 and replaced by a marble altar. A set of plaster cast images replaced the old Stations of the Cross.

During the years 1985/6, major reconstruction of the church took place, both internally and externally, under the direction of Fr Michael McInerney, PP. The new facade gives a modern look to the old church. The organ gallery and the gallery on the south wing were replaced and a new gallery was added on the north wing. The nave of the church was extended and a stained glass window, depicting the Risen Lord, designed by Hilary Gilmore and made by John Duggan of Limerick, was installed behind the altar. A new stone altar was installed, with a new stone ambo and tabernacle surround. New seating was also installed. The boundary walls were lowered and a car park space made in front. The old baptismal font and holy water fonts were retained.

Much of the reconstruction work, costing in excess of 250,000, was done by local volunteers, a labour of love. The remarkable history of the church, which has been such an important part of people’s lives in Clarecastle, is outlined in a commemorative leaflet, which will be distributed at the mass.