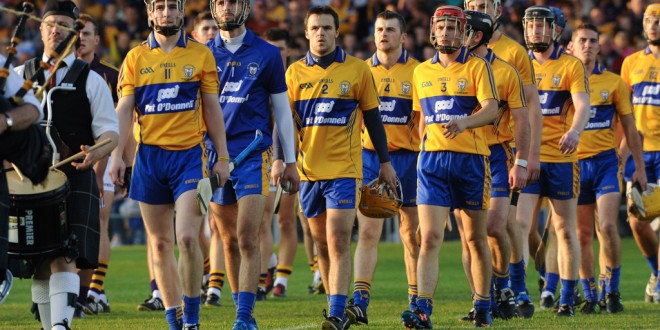 Tony Kelly of Clare leads out his team for the the All-Ireland U-21 final in Semple Stadium, Thurles. Photograph by John Kelly.

Nobody said it was going to be easy and it certainly wasn’t but the sheer brilliance and class of Clare saw them create history and win a third successive All-Ireland under 21 hurling title at Semple stadium in Thurles on Saturday evening.

The defending champions and competition favourites were made fight every inch of the way by a Wexford that never gave up but each time the threatened to hit the front, Clare stepped up a gear and none more so that Colm Galvin and Tony Kelly who fired over some magnificent points in the closing minutes.

Two Wexford goals in as many minutes inside the final ten, had the big Wexford following in full voice but Clare captain Kelly and Colm Galvin replied with some outstanding points to seal a truly wonderful win, Clare’s fourth in six years at this level

Wexford made their intentions clear from the throw in and immediately went on the attack but the first chances fell to Clare with a long range effort from Gearoid O’Connell just wide of the upright while Aaron Cunningham’s early break troubled the Wexford defence but didn’t yield a score.

The opening score came in the fifth minute when Jack Guiney converted a 70m free. The equaliser a minute later from Clare captain Tony Kelly came after he received a superb reverse pass from Peter Duggan. Points were exchanged again with Aaron Cunningham’s effort being cancelled out by another Guiney free.

The thirteenth minute proved to be vital in this exciting contest. A Wexford attack was broken up when Colm Galvin fielded superbly and passed to his midfield partner Eoin Enright. His delivery found Shane O’Donnell and as he headed for goal he handpassed to his Eire Og clubmate David Reidy who found the net.

Guiney from a free and Gary Moore replied with Wexford points but Jamie Shanahan and Tony Kelly responded with excellent efforts for the title holders who finished the half with a brace from their captain Tony Kelly to lead by five at half time, 1-8 to 0-6

A big turnout of Clare supporters is expected in the Abbey street car park in Ennis this Sunday evening for the welcome home celebrations for the three in a row champions, Proceedings will get underway at 6.30p.m.

Tags 3 in a row champions clare