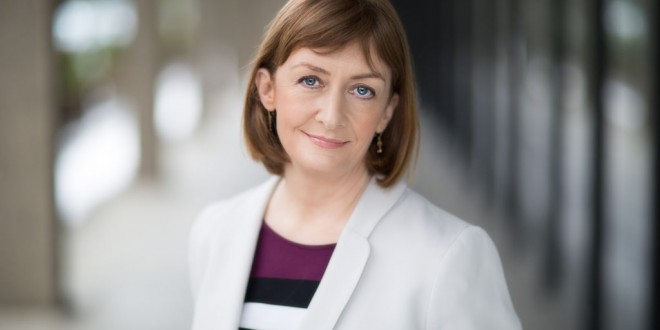 Shannon author and broadcaster, Rachael English’s second novel, Each and Every One, has just hit the bookshops.

Rachael’s voice is among the most well-known in the country, as she presents Morning Ireland, and has more than 20 years’ experience on RTÉ Radio, after starting out on Clare FM, when Irish local radio was launched in 1989.

Her first novel, Going Back, was quite well received on its release last year, but her nerves were still jangling last week, as she prepares to see how readers and critics react to the latest novel. Even presenting a radio show to hundreds of thousands of listeners isn’t adequate preparation, she said. “I’d love to be one of those people who doesn’t get nervous about these things but I do get far more nervous about book things than I have ever done about anything to do with broadcasting. It’s mad.”

She said she feels like people will almost be passing judgement on a part of her. “I try not to let it take over my life but it is like part of you is gone out into the world and it’s there for somebody to pull it apart, if that’s what they want to do.”

The book tells the story of the Shine family, the adult children of which have lived cosseted lives, protected by the family money. When that runs out, things quickly change for them. “With this family, the adult children certainly, they are people who have lived incredibly privileged lives and, when things start to go wrong, they have to start to face up to the sort of people they really are,” she explains.

“All of their lives, all of the cracks have been papered over by the fact that the money is there. When the money is gone, it’s like everything changes. It’s not just that they have to work hard, it’s like your whole life becomes different and you have to face up to things that you’ve been able to hide from before. They all keep their own secrets, some bigger than others.

“It becomes apparent pretty early on that one of them has a lot more money troubles than she would ever admit to, even to her husband. There’s a politician who presents one side of himself in public but the way he lives his life often contradicts his public image. That’s just an idea of the sort of stuff that’s there.”

The Shine parents are also important characters. “They’re from Limerick. Gus, the father, is from the city and the mother, Joan, is originally from east County Limerick and they would both have grown up with very few advantages. They’re real old-school, hard workers and all of that. It’s a contrast between the generations. One of the adults has three children himself, one of whom has just become a teenager and he’s watching patterns repeat themselves too. It’s about family as well, I suppose. Really, it’s about what happens when all of the things that you rely upon are taken away,” Rachael said.

This novel draws quite a bit from her experiences as a journalist. “Going Back was very much a story based around a student adventure but this book draws more on things I’ve come across as a journalist or stories I’ve covered or had to think about. Tara, the main character, is a newspaper reporter. She’s one of these reporters who gets all the rotten jobs. If it’s something that’s incredibly boring, a bit dangerous or involves standing out in the rain for 24 hours, Tara will be the reporter at the desk who gets the job,” she said.

As a journalist, Rachael is limited by facts; stories can’t be rearranged for dramatic effect. But writing fiction is totally different and she enjoys the freedom of being able to make events take whatever course she chooses. “Oh gosh, yes. You can play around with things a bit. It’s lovely to take a scenario and push it out to its limits. You can say what’s the wildest thing that can happen. It’s different to the day-to-day work, where you’re constrained by the facts.”

She was able to step away from the day job a little to write Each and Every One but getting another novel written in a year wasn’t very easy. “I’ve been fortunate in that I’ve been able to take a bit of unpaid leave. To try and get another book out in just over a year was tough going at times alright, but people were great, they were very supportive, so I can’t really complain there.”

The pleasure she takes from writing fiction didn’t waver too much and meant that it wasn’t really a chore. “People say ‘you must be very disciplined, you must be very driven’ and I wouldn’t particularly think of myself as either but, in this case, I just enjoy it and it made it easy to get stuck into it again.”

She never took too long away from the book, although the rate she worked at did vary wildly. “I would try and write a little bit every day, even it was only two or three lines. Then when I had the opportunity I would do quite substantial bursts. I might be able to do 1,500 words a day for a couple of weeks. Then you’d have to go back over it again, change things, excise stuff, decide that wasn’t what you wanted at all.”

Stressing out over what might seem like very trivial details can be an occupational hazard for many authors and she often finds it hard to make definite choices about language. “I’d go back and change things and then I’d go back to what I had to begin with. I’d think ‘that’s a nice word, I’ll use that’, then I’d think it sounds a bit fake and I should go back to just using ordinary, everyday language. I’d agonise over commas!” While Each and Every One is just hitting the shelves, Rachael has already started on her next one, in which the central character will be a Clare woman exiled in Dublin. “I thought maybe it was time to write about what I knew, like they always advise you,” she laughed.

That novel may be a more difficult to write and could take a little longer. “I’d like a little more time, if I can get it, because the book involves a bit more research than the last two.”