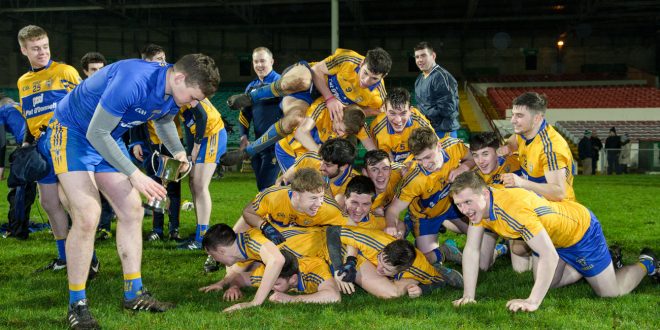 The Clare players celebrate following the Mc Nulty Cup U-21 final win over Limerick at The Gaelic Grounds. Photograph by John Kelly.

INSPIRED by  0-9 from Lissycasey’s Conor Finucane, who put over 0-8 from play, the Clare U/21 footballers won their fourth successive game in this competition in capturing the Peter McNulty Memorial Tournament. The final was played at the Gaelic Grounds on Sunday evening.

Ironically the only game Clare lost was to Limerick in Kilmihil in early January. Since then they have beaten Kildare, Wexford, Galway and now Limerick, all away from home.

Clare led narrowly, 0-8 to 0-7, at half time with Finucane and Eimhin Courntey accounting for all of Clare’s points.

Hugh Bourke kept Limerick competitive with 0-6 from frees over the hour, although he missed a couple of scoreable frees towards the end.

Approaching full time, Clare were just two points up, 0-12 to 0-10 but a close range goal from Joe McGann, following build up playing involving Keelan Sexton and Finucane, placed the St Breckan’s man for the goal. Limerick responded with points from AJ O’Connor and Mikey Morrissey but Clare held out for a commendable and morale boosting win. Finucane and Courtney excelled for Clare as did team captain Darren Nagle.

A more comprehensive report will be published in Thursday’s Clare Champion.