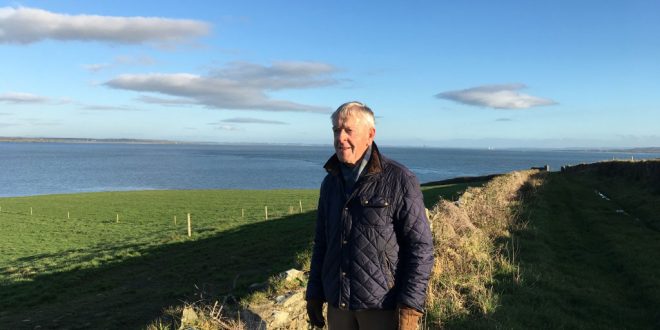 IN January 1947, the Okeanos, a Panamanian-owed steamship, made its way from the River Plate in South America (now the area of Argentina and Uruguay) to Limerick, delivering grain to the firm Ranks, whose grain silo was a well known landmark on the docks in the city. Captain Lampraidos and the other crew members were mostly Greek natives.

My father, Eamon Ginnane, tracked ships as they came and went along the Shannon Estuary from his farm in Rahona. In mid-January, he spied the Okeanos on its way to Limerick and saw the ship again a few days later, anchored off Carrigaholt Bay, noting the difference in its height out of the water, since its cargo of 5,000 tonnes of grain had been deposited in Limerick City.

On the night of January 13, the Okeanos hit the rocks at Kilcredaun Point and sounded her siren.

As soon as the siren sounded, the first on the scene were local farmers from the townlands of Rahona and Kilcredaun, returning home in the late hours from Bidsey Brics pub in Carrigaholt village. They ran to offer assistance (and to be first with the news).

The Okeanos was wedged on two ledges, 60 feet from the shore. The farmers pulled three lifeboats ashore, full with crew.

The morning after the shipwreck, I remember hearing the siren still sounding across the water while we were loading pigs for the mart. I was raging that I had to go to school, so straight after school I made my way up to Kilcredaun. I remember the black and off-white colours of the ship as it loomed up before me, cabin and one upright at the stern and the name Okeanos painted on her bow.

News of the shipwreck spread far and wide, as young and old from all parts of Clare visited the site for weeks after. I overheard one woman say ‘it’s a wonder of the world’ that the ship had landed on solid ground and everyone had been saved.

Our school principal at the time, Barney O’Higgins, encouraged us to call into St Mary’s Parish Hall in Carrigaholt after school to say hello to the crew men. They were accommodated there, sleeping on mattresses on the floor, until they could return home. Anyone who had helped out with rescuing the crew had been given three shillings and six pence. I remember my mother telling me that an elderly man, Dan Cahill, simply looking on, was given this rate too.

As was usual in those days, international ships would call for pilots to escort them along the estuary to their destination at Limerick Docks.

In the case of the Okeanos, the pilot guiding the ship, both in entering and leaving the estuary, was my cousin Jack Brennan, an experienced pilot from Scattery Island. He told me afterwards that he was certain the captain of the Okeanos was familiar with the river road. Rather than calling on one of the three pilots nearer the mouth of the estuary, Behan, Sullivan or McDonald, he waited instead until Scattery Island to pick up Jack Brennan. On the return journey, before disembarking at Scattery, Jack checked to see that the ship’s compass was set accurately for the Atlantic.

The accurate compass setting, the captain’s familiarity with the landscape and the fact that the ship stayed anchored in Carrigaholt Bay until night fell on the 13th, led the locals to believe that the ship was driven onto the rocks intentionally. The captain felt the ship was unseaworthy and unfit for the return journey to South America and, in the interests of the safety of the crew, the rocks were a safe haven.
The light from Kilcredaun Lighthouse, less than a quarter mile from the wreck as the crow files, could be seen shining across the wreck of the Okeanos, lighting up the rocks surrounding her.

The Okeanos was declared a total loss and bought for scrap by a Dublin metal company, Hammond Lane. Once they had acquired the scrap rights for the ship, the Dublin men arrived in Carrigaholt, staying in nearby houses and generally getting on well with the locals. One senior official from Hammond Lane was liked by all, stocky in build with a broad face, a strong Dublin accent and exceptionally well dressed. His name was Tom Mulrennin. He went on to marry a local lady from Rahona, Hannah Hassett and they moved to Dublin where they raised their family.

The first job of the Hammond Lane employees was to secure the ship with wire cables to a nearby stone building, known locally as The Battery. The Battery, built in 1814, is a Napoleonic defence battery, built to guard the estuary against a French invasion.

A few local men, including Andy Moloney, a lovely gentleman from Rahona West, objected to the wire cables being secured to The Battery. They climbed to the top of the battery to loosen the wire cables and produced a hand gun to defend themselves  – in truth it was merely a flare gun for ships in distress.

They were ordered to climb down and despite the large crowd which had gathered to cheer them on, Tom Mulrennin managed to coax them down and invited them to talk things through in the Hammond Lane hut.

It wasn’t the last incident for Hammond Lane. They specialised in cutting equipment and one day three chains from the crane went missing, halting work on the shipwreck. I always suspected one of the culprits was my brother Tony and my brother Thomas confirmed to me recently that he was indeed involved, along with two others. The chains had been removed from the shipwreck site by wrapping them around their waists, covered by their jumpers.

I remember being stopped on the way home from school by a local guard, Garda Dunford, who had been posted from Limerick, asking me to list the people I had seen at the shipwreck the day the chains went missing. At that time, Carrigaholt village had four gardaí and one garda sergeant.

A request was made by the parish priest from the church pulpit to return the chains, which was duly done and work resumed on the shipwreck.

Once the ship was secured, a gangway was erected from the rocks to the ship. Any local with a bit of courage crossed that gangway, high above the sea.

As children, we became very familiar with the wreck, sometimes fishing from its stern. A farmer from Cross, by the name of Boland, would often sit out at the farthest point of the stern to sit alone and fish.

There was no regard at the time for health and safety or indeed pollution. For months afterwards, Rinevella Bay was covered with engine grease, which we would collect by the bucket load and use to coat the axles on our own cart.

Hammond Lane worked for months on the Okeanos wreck, transporting the metal by lorry to Carrigaholt Pier and loading it onto a ship for export. When their work was done, their departure date was announced at mass and the locals were sorry to see them leave, many gathering at their hut for a drop of uisce beatha to wish them well.

A neighbour was among the well-wishers and he noticed their lorry was filled to the brim with tools. A large coil of rope caught his eye – so he quickly threw the rope over a nearby ditch into Boland’s field, out of sight.

Once the men were safely on the road to Kilkee, he returned to collect the rope, using it for many years to come, tying up his cows when housed during the winter months.

The remnants of the Okeanos are still visible today on the rocks off Kilcredaun Point. Walk up past the O’Curry Irish College and continue to the Napoleonic battery, with its dry moat still visible.

The batteries were built in matching pairs, with the Kilcredaun battery matched to one on the Kerry side of the Shannon Estuary at the Cliffs of Dooneen. It had its own subterranean tunnel.

Nearby is the holy well of St Criodain, from where Kilcredaun gets its name. The well itself is located in a cleft of the cliff face, accessed by hazardous stone steps.

The simple cross above bears the name of Naomh Criodan on one side looking landward and the name Naomh Senan looking out across the estuary to Scattery Island.

The Okeanos keel can still be seen, standing firm against the wild Atlantic winds and waves.