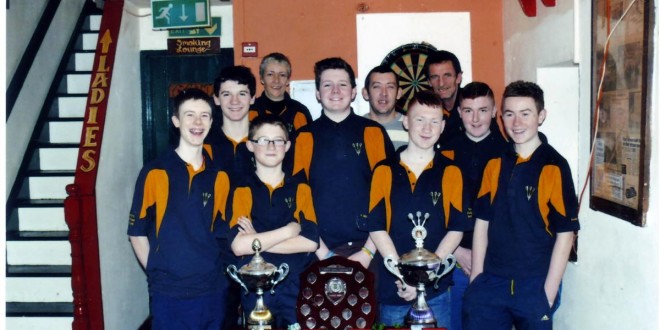 CLARE darts received another timely boost last week when the county side captured the National shield title at the West County hotel.

Pipped by a single point in their group for championship honours, had beaten Meath, Cork, Louth and Roscommon but lost narrowly to Waterford

In the shield they defeated Kilkenny, Tipperary and Mayo to set up a final meeting with Waterford and this time Clare were the victors.
The County’s B team suffered defeat in the Provincial final.

In the past twelve months, the A team has reached the semi-finals of the West Coast and Cork tournaments. On their way to the title Eoin Lahiff (Kilrush) checked out on 167, James Youdell (Ennistymon) checked out on 134, Adrian Ford (Ennis) had a 154 checkout and Brendan Casey (Kilrush) had a 114 checkout.

Brendan will be a member of the Irish team in the European youths cup in Austria on July 1 next.