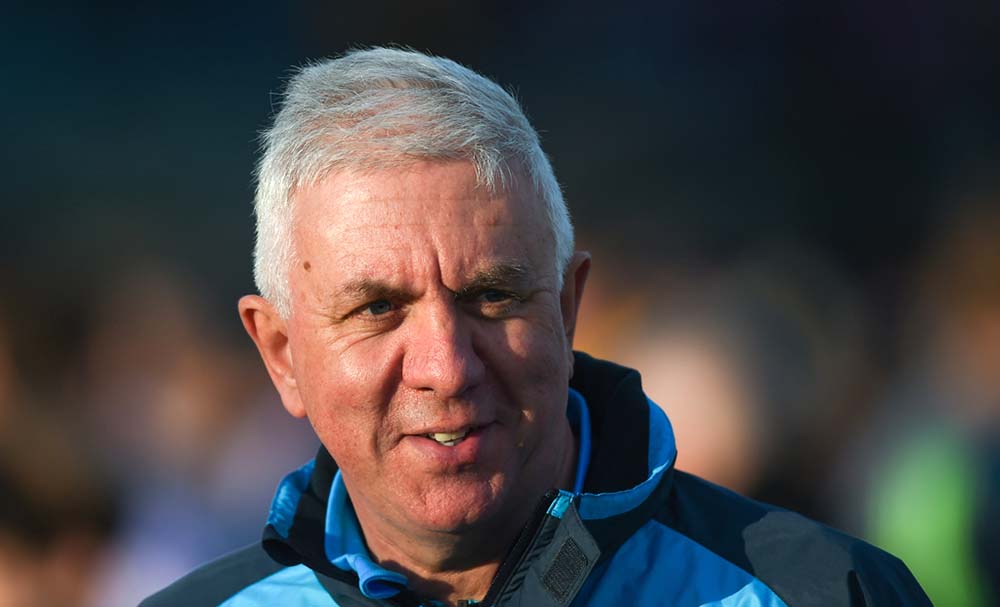 1 July 2017; Dublin manager Ger Cunningham reacts at the final whistle following his side's victory in the GAA Hurling All-Ireland Senior Championship Round 1 match between Dublin and Laois at Parnell Park in Dublin. Photo by David Fitzgerald/Sportsfile

Having spent a few years patrolling the sidelines, with both Cork and Dublin, former Rebels All-Star Ger Cunningham is revelling in the armchair role he has now taken up. He talks to Gerry McInerney about Sunday’s prospects

Momentum is key and former Cork player and selector Ger Cunningham believes Clare’s new-found confidence can be traced to a seminal moment in Thurles a few weeks ago.

Jake Morris’ late strike rebounded back into play off the butt of Donal Tuohy’s post and, in a sweeping counter-attack, Clare opened up the Tipperary rearguard for Ian Galvin to strike the killer goal.

From hanging on to Tipperary’s coat-tails for virtually the duration of the match, Clare kicked on and Peter Duggan delivered the coup de grace with an audacious point from the sideline.

Clare got the result, if not the performance but it was the break the team craved and maybe, just maybe, the spark required to ignite their season. That view was given credence when a rejuvenated and energised Clare tamed a strangely lethargic and lack-lustre Limerick team in Cusack Park seven days later.

Now, Clare sit on the cusp of a first Munster title in 20 years. The St Finbarr’s clubman believes it is well within their grasp to end that barren spell, even if their track record in Munster final meetings with Cork is horrendous.

“What’s past is past. Everything is on the day and Clare enter Sunday’s final on the back of a huge momentum swing,” he says. “When Clare look back on their season at the end of the year, maybe those 18 seconds in the Tipp match could be defining, the difference between going out and wherever it ends up for them from here on in.

“If Jake Morris had got the goal, if the ball had gone wide and there was a break in play, Clare’s season was over. It was a six-point turnaround in the context of the game and I think their performance in the five minutes after that goal has given Clare a phenomenal lift in mental strength. To finish out the game in the manner they did, to do it in Thurles and to beat Tipperary there for the first time in 90 years, the momentum from that is huge.

“They are in the last six. Galway are justifiable favourites and seem a bit ahead of everyone. But after that, Clare will see themselves as very much in the mix. Hurling is all about tight margins and there’s a big prize to play for as well in the Munster final, in that you avoid Galway in the All-Ireland semi-final if you win,” he points out.

While his heart pines for a Cork victory, Ger, who was part of Jimmy Barry Murphy’s backroom team in 2013, believes the final will be a toss-up.
“There’s not a whole lot between the teams. If you look at their most recent meeting, the opening round of the championship, there were four or five points in it for a finish. But no doubt Clare had the opportunities early in the game. They opened Cork up quite a few times and things could have ended up differently.

“I suppose both teams were feeling their way but to lose the first match and then turn things around and win the next three was huge for Clare. The team now looks more cohesive and much better and management have picked players in their best positions. That will be the challenge for Cork on Sunday. It won’t be like-for-like because the Clare team is now in a better place. People say it’s a 50-50 game and it is. There’s going to be very little in it, whichever way it goes,” he predicts.

While players like Tony Kelly, Conor McGrath and Podge Collins are struggling to rediscover the form that saw them hit the dizzy heights of 2013 when they lit up Croke Park, Ger believes Clare have a strong hand as regards the strength of their bench.

“Every team needs its leaders in the context of guys that they can turn to and build on. Clare lost Conor Ryan who would, again from the outside looking in, have been seen as one of the strong characters within that group.

“The beauty of it now is that Clare seems to have a settled team but, the way the game has evolved, you need substitutes who can have an impact. Podge didn’t start against Cork or Tipperary but, when introduced against Tipp, made all the difference.

“Clare potentially have impact substitutes, more so than Cork. With Conor McGrath or Cathal McInerney, a player who hasn’t featured at all, potentially, you have forwards who can turn a game. In Cork, with the loss of Alan Cadogan, management have had to dip into the reserves and play fellows who they otherwise would have brought on from the bench and make an impact. It’s not a 15-man game anymore. You need a strong bench and Clare seem to have one that is stronger than Cork’s,” he adds.

Cork’s game plan revolves around working the ball through the lines but, when pressurised on their own puck-outs by both Limerick and Waterford, they coughed up scores. Ger is adamant that Cork should stick to their guns and trust in what they are doing.

“If that’s your plan you can let one dropped ball, one breakdown or one interception force your hand and influence what you are trying to do. Some people are frustrated with the short puck-outs, the lateral passing across the pitch, the goalie passing to the full-back, getting the return and then pucking it up the field.

“Obviously there’s a plan for whatever team who are playing and central to that is that you have to bypass where the opposition are strong. You have to take it game by game but, certainly, when teams pressurised them on their own puck-outs, I suppose that would be the area of concern. Where I worry is that if good teams take them on, have they got the legs to withstand it?” he asks.

Ger, who stepped down as Dublin hurling manager at the end of last season, is surprised that neither team have been back on All-Ireland final day since 2013.

“If you look at it, between both teams they have nine or 10 players who played in that final or were involved in some shape or form. Five years on and off the back of their U-21 All-Ireland successes, I would have expected Clare to have been back in Croke Park. I think Clare would have been expected to kick on more so than Cork.

“But, again, Conor Ryan is a huge loss and I think players holding down the goalkeeper, full-back and centre-back positions haven’t established themselves. You need great players in those positions, they are pivotal to any team.

“In those positions, I think they’ve lost their way a little. David McInerney went away travelling, was tried as centre-back throughout the league and obviously it didn’t quite work out. I think he hasn’t got back to the levels of 2013 and only now is showing signs of doing that.”

Holder of three All-Ireland medals and six Munster championships, Ger feels that John Conlon carries a greater threat in the inside forward line and that Tony Kelly should be pushed up front.

“Putting John Conlon full-forward is key. He seems to be rejuvenated this year. When the ball goes in there, you know that if he doesn’t win it, it won’t come back out too easily. He’s strong on the ball and a handful for any defence.

“Tony Kelly is hugely effective at centre or wing-forward whereas, at midfield, he’ll hit as much ball as the fellow he is on and maybe score as much as him.

“It’s just at midfield you are required to do more defensive work and, for me, Tony Kelly makes a much greater impact going forward. If I was involved in a team playing Clare, I’d be delighted to see Tony back playing in his own half-back line,” he says.

“Kelly at centre-forward takes a lot of minding. You’ve got to decide do you go after him and run the risk of being opened up or do you hold the centre. He can shoot the lights out on any given day and finish up hitting six or seven points. I suppose these are the questions Cork will have to ask themselves and see if they can come up with the answers,” he says.

He thinks key for Clare on Sunday is not to allow the game to open up into a shooting contest.

“Last year, Cork brought on several young fellows. They placed a lot of trust in them and they deserve a lot of credit for bringing these guys on. There doesn’t seem to be an issue with second year syndrome either. Some have kicked on again, particularly Darragh Fitzgibbon.

“They are very young, all good hurlers with lots of pace and they’ll be looking for that open type game. Cork will want a shootout and if they hit 24 or 25 scores a game, which they have been doing in all their matches thus far, they will be very hard to beat.

“If it’s a dogfight and Clare take them on and make it a battle field, the confidence they’ve got from beating Tipperary and holding Limerick down to 15 points, even though Limerick were flat, will stand to them in good stead. If your defence isn’t conceding it’s a big plus but Clare will need to keep it tight,” he says.