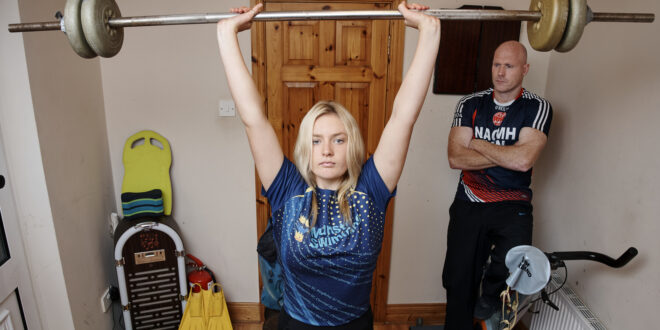 Leana Liddane, a member of the Irish 2024 Olympic swim training programme, who has had to resort to dry land training due to the closure of swimming pools as level 5 Covid restrictions continue. Photograph by John Kelly.

There are fears that the closure of sporting facilities as part of the level five Covid-19 restrictions will lead to young athletes falling away from their chosen disciplines.

Under the current restrictions, underage GAA, soccer and rugby are all on the back burner while sports such as swimming and golf have also been deemed to be non essential for the duration of the measures.

For promising athletes like Leana and Sam Liddane, it means that their sporting plans have ground to a halt for the second time in 2020. Leana, who is part of the National performance development swimming squad, also has one eye on the 2024 Olympic Games as part of the women’s relay team. Her routine is now disrupted with the closure of her training facilities, and her mother Christina outlined that this latest setback could have real implications on what comes next.

“We were in the pool training on March 12 when everything shut down immediately that day and they said it would be closed for three or four weeks. It was actually six months before swimmers got back into the pool. They have only been back for six weeks, and they are now being told that it will be another six weeks before they will be allowed again. This is the second season that has been affected for swimmers. July was meant to be their national championships and December was to be the short course championship which a lot of them got qualifying times for in training. Both of those are gone which is really tough on them. That is what these young people aim toward and this is their goal. They have chosen this sport and this is their target and now it has been ripped out from underneath them with no consideration” she said.

Christina worked as a swimming teacher in UL before the outbreak of Covid-19 saw a field hospital built on-site. She detailed the dedication shown by 14-year-old Leana to her chosen sport, and the precautions that were being taken before the plug was pulled once more. That included pre-screening before leaving home each morning, while masks and temperatute checks were also mandatory.

“She gets up at 4.30am to be in UL at 5.15am. She leaves at 7.30am and goes to school. I collect her from there and she is back for another training session then before getting home to bed. It makes no sense to have them closed and it is not just the elite swimmers who are disrupted by it. There are a host of club facilities also forced to closed. Swimming is not like other sports where you can train in a different setting, they need their pool. In UL, we had two swimmers per lane who would start at opposite ends of a 50m pool. They had to wear masks until they got there, change pool side and leave once they were finished. It is an incredibly controlled environment” she stated.

Leana’s 10-year-old brother Sam has also seen his sporting outlets come to an end with football, soccer and golf all now out of bounds. His father Mick, an All-Ireland Masters winner with Clare and Naomh Eoin GAA stalwart, outlined that not being allowed out for a round of golf in particular is bizzare.

“We were very disappointed over the decision to close the golf courses. Sam and I would often head out for a round in Woodstock and have the place to ourselves. We don’t touch flags, there are no rakes in the bunkers and we are using our own equipment. It is a huge open outdoor expanse, and we go from our car to the course and back to the car again. How doing that would have any impact on Covid-19 numbers just seems ridiculous to me” he stated.

During the initial lockdown period, the Liddane’s improvised in keeping Leana’s swimming up to speed. A 12 foot inflatable swimming pool was filled in the back garden with Leana attached to a bungee cord on a pole to allow her swim, albeit stationary.

“The neighbours told us that it is usually the dogs that are tied up to poles, not the children” laughed Christina.

With the changing weather conditions of the winter months, that outlet is no longer an option and Christina feels that next few weeks will be critical in keeping her engaged with the sport.

“We have had tears in this house with them saying they can’t believe it is happening again and how long will we be out now. How many young people are going to be lost to sport because of all these things being cancelled. There are serious mental health implications to think about and I have seen first hand in our house what impact it is having. That is outside of their general fitness and wellbeing. We are not one of those people saying that the GAA should not be on, but we feel if it is, then plenty other sports should be too. Children like Leana have shown unbelievable commitment and dedication so it really is so important that they don’t lose out because of this” she outlined.

The Liddane’s as a family have shown huge dedication to the cause, with the decision being taken in the last few years to move to Ennis from their home on the Loop Head peninsula in order to be closer to the facilities needed for Leana and Sam to continue their sporting progress. So what do they want to see happen now?

“We are just going to stay fighting to have the facilities open. Schools are open and they are mixing with their friends who they would be training with anyway. We don’t want to give up so we just have to try and focus on keeping them motivated, and Leana in particular. She has her dream of the Olympics so we will keep her going with some form of dry land training over the next while. We are hoping that they will reopen by December 1, but it not then we are not sure what will happen after that” she said.

Previous Return to The Twelve
Next Championship Corner With Colin Ryan