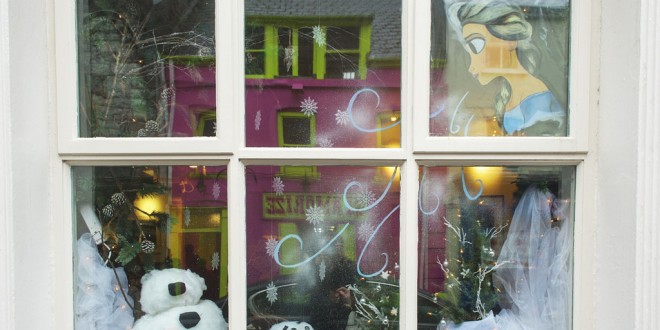 THE retail community in Ennis have created a series of magical, sparkling windows allowing the public to dip into the world of Christmas fantasy. Their imagination was inspired this year by the theme of The Clare Champion’s annual window display competition, Frozen in Ennis.

This is the 11th year of the competition and entrants were invited to, once again, give free rein to their creative sides and they certainly Let it Go.

The wide interpretation of Frozen in Ennis, inspired by the 2013 Walt Disney film, the highest grossing animation movie of all time, was reflected in the glittering shop fronts all around the town.

Since its release last year, Frozen has become a firm favourite with children of all ages. Inspired by Hans Christian Andersen’s fairy tale The Snow Queen, it tells the story of a fearless princess who sets off on an epic journey along with a rugged iceman, his loyal pet reindeer and a naive snowman, in a bid to release her sister from the terrible pain she created by her anger.

The selection process proved very difficult again this year for the team of Champion staff. There were even some revisits to shops and businesses, such was the high standard of artistic endeavour used to decorate the windows, with arctic scenes bedecked by an array of the film’s characters, from Princess Anna and Queen Elsa to their happy childhood snowman, Olaf.

The winners were announced at a well-attended reception hosted by The Clare Champion, in The Old Ground Hotel. First prize was awarded to The Town Hall – who took second prize last year – for their beautifully decorated windows on O’Connell Street.

Deciding on the second prize winner proved too difficult for the judges and they agreed that Morgan Cahill Opticians, Cabey’s Court, Parnell Street with its splendidly contrasting black frontage and sparkling white-ice display; and Monument Hair Salon in Parnell Street, with its large window featuring the main characters and its clever use of plaited blonde hair, couldn’t be separated, and were declared the joint winners.

The third place prize winner was Cairde on Barrack Street, for an appealing and artistic use of the character models that transported the judges straight into a tiny winter wonderland.

Clare Champion managing director, John Galvin, said he had been so impressed by the large number of window displays again this year that he was truly thankful that he wasn’t a member of the judging panel. However, he agreed with the judges’ choices and congratulated everyone who entered the competition.

“The annual window display competition, which really does so much for the image of the town, is our way of helping to promote business in Ennis at this time of the year, which is especially critical to the success of everybody in the retail trade. We would encourage people to keep whatever spending power they have in Ennis and other towns in the county,” Mr Galvin said.