June 6, 2013 Comments Off on Visitor centre mooted for Mountshannon

A NEW visitor centre in Mountshannon to facilitate the hundreds of tourists viewing the first white-tailed sea eaglets on Bushy Island may be provided in the coming months, if plans come to fruition.

May 30, 2013 Comments Off on Funding windfall for Killanena/Flagmount

THE parish of Killanena/Flagmount has received a funding boost of €230,000, which will go towards the development of a community centre. The funding was sanctioned to Loughgraney Community Development Association this week under the Rural Development Programme for the proposed multipurpose facility, which will be located in Flagmount village. The building will comprise a sports hall with changing rooms and toilets and it is envisaged that the hall will be suitable for social, educational/training events and a variety of indoor sports. Speaking about the allocation, development association secretary Kathleen McNamara said the group is delighted with the news that they can now press ahead with the provision of this long awaited facility. “We are thrilled. It is great for the Killanena/Flagmount parish and surrounding area because it will be of benefit to the whole North-East Clare area. It is something we have been trying to achieve for years and it is great to see it come to fruition at last,” … 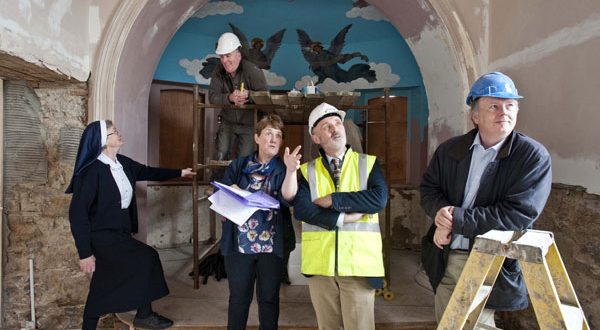 PHASE two of Cnoc na Gaoithe, the Tulla Comhaltas Cultural Centre is almost complete and is due to be opened to the public at the Féile Chnoc na Gaoithe at the end of June. At the Gathering event, which runs from June 28 to 30, the second phase of the cultural centre build will be opened, unveiling the newly restored oratory of the old convent.  As part of the renovations, the original stained glass windows are to be reinstalled. The oratory will house a collection of photographs and memorabilia commemorating the Sisters of Mercy in Tulla since 1883, which has been donated by the Sisters of Mercy. According to the committee up to 10 local people have been employed in the construction phase of the development and approval has been given to the centre to provide employment for two people under the Tús scheme. These posts will be in respect of caretaking and administration.The original parlour in the former convent …

May 23, 2013 Comments Off on Student designer wins fashion award

Kilkishen fashion student Michael Stewart has been announced as the overall winner of The Limerick School of Art and Design, LIT, Graduate Fashion Show.

May 23, 2013 Comments Off on Scariff pupils’ drama draws on Country Girls

The culmination of a pioneering student engagement with the life and work of Edna O’Brien was brought to life with a dramatic performance at Scariff Community College last Thursday.

May 16, 2013 Comments Off on Really Free moneyless market opens in Scariff

Scariff Community Co-op goes moneyless this weekend as a new market spearheaded by local resident, Deirdre Morrissey has its first day out.

Minogue tops the poll after first count in Tuamgraney election

May 16, 2013 Comments Off on Minogue tops the poll after first count in Tuamgraney election

The first tally is in for the annual Tuamgraney Mayoral election and current mayor Ted Minogue is holding poll position following the launch event last weekend.

May 9, 2013 Comments Off on Great turnout for inaugural Bodyke festival

THE East Clare village of Bodyke remains on a high this week following the success of its first ever festival, which drew up to 1,000 people.The Bodyke Gathering saw an estimated 1,000 people come through the village over the May Bank Holiday weekend to take part in the various events organised.“It was absolutely beyond our wildest dreams. It went exceptionally well. We are here nine years and we never saw the likes of it.“I wasn’t here at the time of the Bodyke evictions stone, which President Hillary unveiled, but the people are saying the gathering at that wasn’t half of what we had here,” according to Susan McMahon of the organising committee.Chairperson of the Bodyke Gathering Committee, Colm Wiley said, “There was up to 1,000 people in Bodyke over the weekend. We had a great turnout.”Ms McMahon said among the highlights were the sporting events organised on Sunday at the GAA field. She described the response as “phenomenal”.The event’s launch …