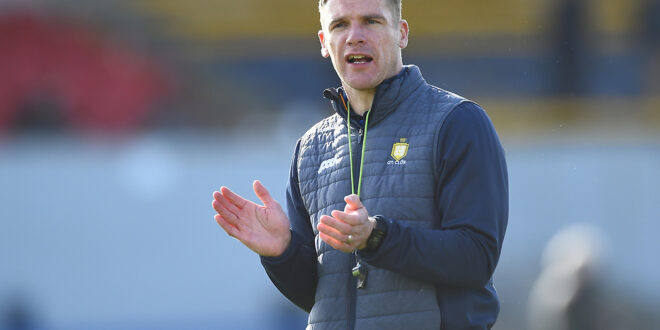 Carson Confident Banner Are Ready For Trip To Tipp

Clare’s recommenced 2020 season continues unabated this weekend where a trip to Semple Stadium for a Munster SFC semi-final against Tipperary awaits.

Colm Collins’s side come into the game off the back of retaining their status in Division Two of the National Football league, albeit after defeat to Armagh.

With that goal now parked, all eyes are firmly fixed on the first step on the potential road to a provincial decider. Victory on Sunday afternoon would tee up a home semi-final against either Limerick or Waterford, but there is no one in the Clare camp looking past the challenge of the Premier.

That includes Clare coach Brian Carson who is in his second year involved with the Banner’s backroom team. The UL Exercise Physiology lecturer feels that the competitive nature of their last two games leaves them well placed to take on the challenge that lies ahead.

“Both those games were perfect preparation for Tipperary in many ways. Armagh were the stronger of the two teams so we were building in terms of the strength of opposition we were facing as championship moved closer, and that Tipperary game will have a frantic pace to it at the weekend. Armagh were a really good challenge and like Tipperary, they are a very good attacking side and they have good marquee forwards, which we will come up against at the weekend too, so coming up against an attack like that was really good preparation for our defence. In terms of preparing for the weekend, we are happy with the way we are coming up the levels. We would have liked to get a different result on Saturday obviously, but it terms of performance we are pleased with how things are progressing” he noted.

Clare and Tipperary have built a healthy rivalry since Colm Collins took the reins, with both sides escaping the clutches of Division Four when they met in the 2014 league decider in Croke Park. Victory that day went the way of the Premier, as did each of their subsequent meetings in 2015 and 2016. Clare made the step up the second tier in 2016 as Division Three champions, with Tipperary joining them there 12 months later. The sides played out an 0-11 each draw in Cusack Park in 2018, but last year saw the Banner mount a stirring comeback in the closing stages of their clash in Thurles to clinch a first victory over the Premier of Collins’ reign while also sending them back to Division Three.

2020 saw David Power’s charges on the brink of going back to the basement division but victories on the bounce over Offaly and Leitrim saw them saved from that fate. Carson feels those wins mean Clare are coming up against a side who will be confident of maintaining that form.

“They will be coming with a nice bit of momentum and they have good some big names back. They won their final two games in the league and when you come through games where everything is on the line, like their game against Leitrim, it always brings confidence and momentum with it. They will be hoping to exact a little bit of revenge too after that loss to us last year saw them go down to Division Three. There is never more than a kick of a ball between Clare and Tipperary, and last year was actually the first win over Tipperary that Clare had in a few years. We will be treating them with the utmost respect, and with the fact that they are on their home patch, they will be fancying their chances of progressing to the next round. It will be fiery stuff and there will be huge intensity and we will have to hit every target if we want to get the win” he warned.

After seven months without a game, Clare are now facing the prospect of a third in as many weeks, with a fourth to come should they come through Sunday’s challenge. Carson admits it is a challenge to manage those demands but is hopeful they have got the mix right for this weekend.

“Three weeks in a row means you are starting to test players, and we have used the panel over the last two games to try and spread the load a bit. The training load at the moment is light enough because we have been planning for this, and I have been working closely with our S&C coach Rob Mulcahy to make sure that players are kept as fresh as possible. I think we have done a good job on that and they are in great shape which is a credit to Rob and also the clubs who gave them back to us in good shape. Tipperary will be in the same boat with their third week in a row so I think the depth of your panel is important too. From that point of view, we have added to ours well over the last few years so I think that will stand to us” he said.