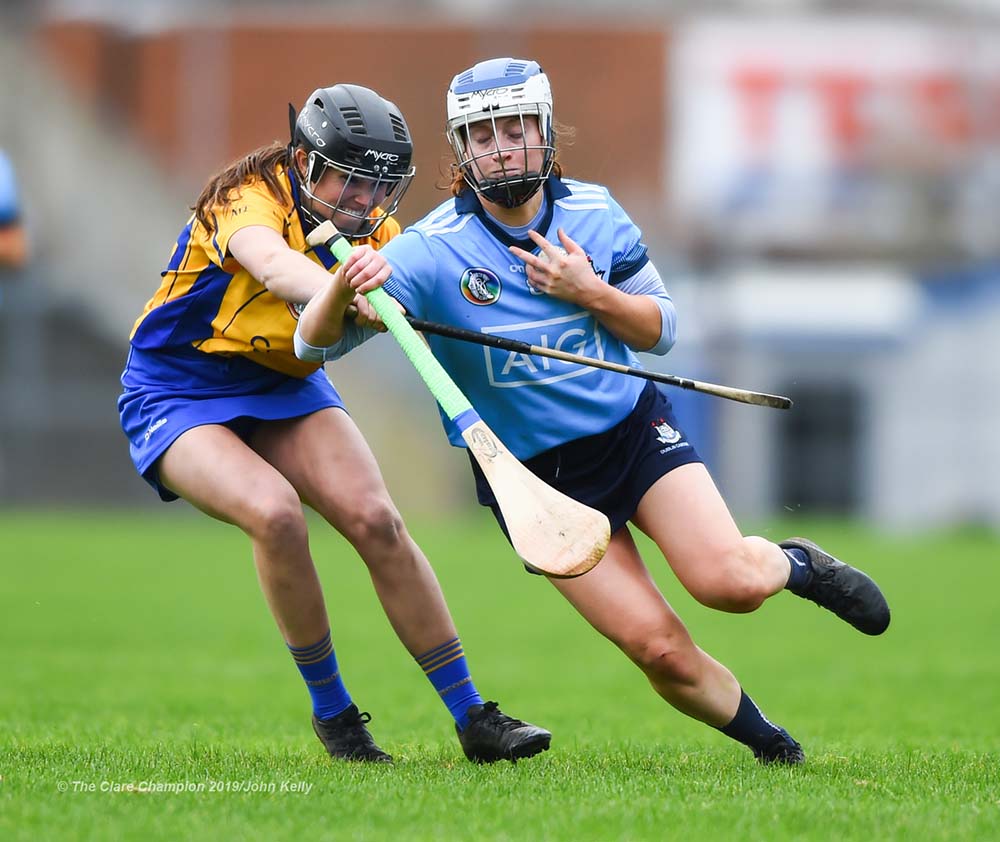 Orlaith Duggan of Clare in action against Roisin Baker of Dublin during their Division1, Group 1 game at Cusack park. Photograph by John Kelly.

After the decision to remove all second string teams from the All-Ireland Intermediate and Premier Junior camogie championships, it means that Clare’s hopes of silverware at adult level this year rest on Ger O’Connell’s senior side. They take on Dublin this weekend in a winner takes all showdown for a place in the quarter-finals of the championship, with Tipperary already safely through as group winners.

Joint Clare junior manager Ann-Marie McGann looks ahead to that game along with giving her thoughts on the decision to bring their championship campaign to a premature end.

It was a disappointing end for management because we had worked very hard but it was even more so for the girls because we really had a good chance.

They put incredible work all year and we were training for nearly 12 months because that is how seriously we were taking the championship this year. There have been some rumblings from other counties about moves to try and get the intermediate and junior championships suspended for 6 weeks and then see how things lie. It was a directive from the Department of Sport and only time will tell if they row back on that and allow the Association to put those teams back in. I can see their thinking behind it in trying to limit the amount of people moving around for the coming weeks ahead but calling a complete halt to it was a big move. I am nearly more disillusioned as to how they are going to restructure a competition in the Premier Junior that now only has two teams left in it with Roscommon and Armagh. With the greatest of respect, I think we would beat both those teams so restructuring is a hard word to take.

On the field this weekend we will have that winner takes all clash between Clare and Dublin and it is not the first time there is a storyline involving these two sides, but let’s not talk about that infamous coin toss affair.

I watched Dublin playing Tipperary last weekend and they were very competitive in that game. That being said, it was hard to tell if Tipperary were only in second gear or if Dublin were a real threat. It could have been the latter because they missed two goal chances and had number of wides early on in the game. I don’t think Clare will get away with allowing Dublin to get a run on them. They have the likes of Sinead Wylde and Aisling Maher who were very impressive for them. They have a real goal threat in Kerri Finnegan and she will punish any lapses in concentration. Clare cannot afford to cough up any silly frees either because Maher will fire them over gladly.

From a Clare point of view, it was unusual in camogie terms to see seven different scorers on the board for a losing side in that Tipperary game. There is a great focal point for the attack in Áine O’Loughlin but teams are able to counteract that and sit back a bit deeper. Maybe Clare will look at the likes of Robyn Conway or even Chloe Morey to come and offer something different and work off the breaks from Áine on the inside line to try and get some scores on the board early on, so there might be changes to the line up on Saturday.

Alannah Ryan was our best defender the last day and any time she did get caught out, she recovered really well so Clare will need her to repel the Dublin attack. Laura McMahon has moved forward in the attack so Clare Hehir will have to start using her lungs to command players to come back when required and she has loads of experience to do that. Niamh O’Dea made a huge difference when she came on the last day and she was without question the standout player in this year’s club championship. There is going to be a race against time for Ciara Doyle to recover from the dead leg she picked up against Tipperary so there might have to be a restructuring done in defence as a result. It is easy to be critical in the wake of the Tipperary game but there have been players carrying knocks and not able to train fully or play previous challenge games so it is hard to throw them into the championship setting. Hopefully that will have been rectified over the last few weeks and players will have put their hands up to be picked.

I do think Clare will have enough to beat Dublin but for their own morale facing into a quarter-final, they need to dominate from the outset and be ruthless in how they go about it. They need to set down a marker and that will stand to them going forward.

Previous Shannon crisis: No scheduled passenger flights for 4 weeks
Next Carson Confident Banner Are Ready For Trip To Tipp