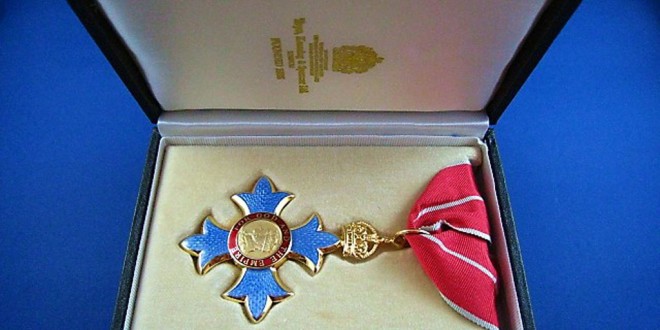 A NORTH Clare woman was awarded an Honorary British Empire Medal recently for her contribution to her adopted home in the UK.

Mary Daly from Lisdoonvarna was conferred with the award from the Queen of England in recognition of her voluntary services to the Ashford Community and the Kent Multiple Sclerosis Therapy Centre.

Mary was told she was being considered for the honour in July and asked if she would accept it, if she was selected.

“I had to keep it quiet, which was the hardest thing ever,” she recalled, adding that she was dying to let the secret out but “I could only tell Michael, my husband”.

Official confirmation of her award came from the Foreign and Commonwealth Office by letter in recent weeks. It cited her services to the Butterfly Appeal Campaign for Multiple Sclerosis Therapy, in which she raised more than £1.6 million for the opening of a state-of-the-art MS centre.

Mary emigrated from Clare in 1989 and has been living in Ashford, Kent, since 1991. After giving birth to her second child in 2000, Mary was diagnosed with Relapsing and Remitting Multiple Sclerosis and has worked tirelessly to raise awareness of the condition ever since.

Over the past two years, Mary has organised three black tie balls, golf days, beer festivals and community events, as well as delivering after-dinner speeches to groups such as the Masons, Rotary Clubs and the Women’s Institute.

The mother-of-four works as a community champion at Tesco and has also travelled to various schools throughout Kent to raise awareness of MS and the importance of being involved in local charities.

According to Mary, her personal highlight in the campaign was organising a concert in Canterbury Cathedral and addressing more than 900 people there.

The British Empire Medal (BEM) is presented to people who have made a sustained local contribution or completed innovative, high-impact work.

“This is a testament to the community of Ashford and the people of Kent and all my family and friends in Ireland because they are the ones who supported me and the campaign,” Mary said.

Oonagh Williams, a friend of Mary’s in Ashford, described the Clare woman as “a driver, motivator and she, herself, counts herself lucky to have such a huge extended family of friends in Ashford. But we feel we are the lucky ones to have Mary in our lives. At times her pain is visible in her face but she never complains.

In addition to the MS appeal Mary is a very active mum and parish person. She chaired the school’s PTA, raising thousands for the school to purchase items that the school could not afford. She has organised parish fetes and dances raising money for local charities in Ashford. We are very proud of Mary in Ashford.”

Mary was back in Clare last weekend to visit her family and will be receiving her medal at a special ceremony where the insignia of her award will be presented by a Minister of the Crown or a Lord Lieutenant.

“I sent back my letter of acceptance and my sister Gertie will fly over for the ceremony. I am allowed to invite two guests so my husband, Michael will come and my sister, Gertie who lives in Kilfenora. She will represent North Clare,” Mary concluded.