Home » Lifestyle » Tom and Gerry are cutting it fine 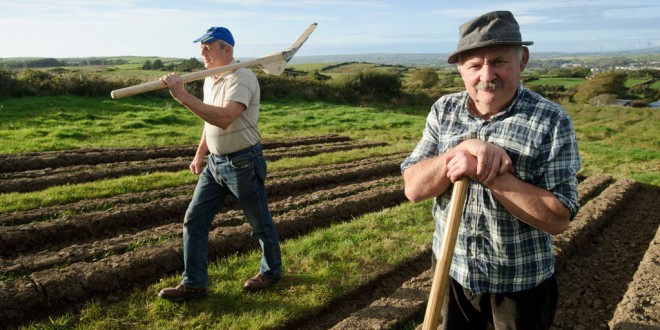 Tom and Gerry are cutting it fine

Monreel’s Gerry Mullins was presented with a silver medal in Portlaoise at the weekend, after coming second in the National Loy Digging Competition, held at The National Ploughing Championships in Ratheniska, County Laois last month.
Tom Kennedy from Ennistymon also took part in the competition, securing fourth place overall.
Gerry’s performance had earned him enough points in his national debut to win the competition but he was penalised for breaking a rule.
Loy Association of Ireland special advisor, Tom Egan explained.

“Gerry would have come first but for he was penalised. He received a 10-point penalty because he broke rule number two. When you are digging, you put down lines to nick the soil, then when you are finished, you lift the line and roll it up but Gerry must have forgotten that and left it down,” he said.
It is not something Gerry will forget again.
“I won it, sure I had the highest score,” Gerry said.
“I had it won but for the penalty. It was marked right. I left the line down, I was wrong. I had a grand job done on it overall, to tell the truth, but I left the line down. With the help of God, no matter what we are doing, we will be back at it next year and we will go for gold, if we can. To get that type of score, in your first year, there is nothing wrong with it,” Gerry said, adding, “I got 128, the highest there and the penalty brought me down to 118. The fellow who came first, I think he scored 121. I had it cleaned up. I learned a lesson with the line but I didn’t think they would be as strict as that. But those are the rules and it won’t happen again.”
The North Clare men, both part-time farmers, are the first participants ever to represent the county in the national competition.
“The loy is traditional to Leitrim, Cavan and Longford. Clare never had a loy as such. In Clare, we had the old traditional spade, a smaller version of the loy so myself and Gerry had to compromise and make our own loys to meet the specification for the competition, as set out by the governing body, the National Loy Association,” Tom Kennedy explained.
“The loy is made from ash, with a steel point, so being a carpenter was very helpful when we started making our own,” he added.
Both Gerry and Tom took up the loy three years ago and Tom was fourth in the country in his first year competing.
“I started in 2012. I had to make the loy from scratch really. We always had the spades [for turning ridges] here in Clare but they wouldn’t comply. The Loy Association came to the county championships in Newmarket in 2012 to promote the sport. They had loys there and there was a competition and I got through to the National Ploughing Championships. So I took a template from the loys that were there and I began making my own one. I was kicking it around for a while and then I made it in about a week or so,” he said.
“I was always able to turn a ridge with a spade. We always planted potatoes at home with the old-type spade in my father’s time so it would have been the same with Gerry – he would have known it from his father’s time too,” Tom said.
“I did a bit of it when I was very young,” Gerry acknowledged, “with the old spade, turning ridges for the onions and spuds and all that but that is many moons ago.”
Gerry was set to take part in the competition two years ago but he was unable to attend in the end because he required a hip operation. Then, this time last year, he underwent the surgery, clearing the way for participation in 2015. The sport is something he believes is great for mobility.
“It is great, I really enjoy it. If you only did an hour a day, it keeps you mobile and keeps you going. You are out and moving and using the arms and legs and it keeps your mind occupied too. You could stay sitting in the house all day. We used to have the building but that is gone now, so this is great to get you out and doing something. It is a pity there are not more youngsters at it, though,” Gerry continued.
Tom concurs.
“Since the downturn in the building trade, we had all the time in the world for this. That is why we got into it in the beginning. It was great to do it alongside someone else because they push you or you push each other, if you like. We’d love to see more people coming to the county competition. Anyone who wants a bit of help to make a loy, we would assist them in any way,” he said.
“They can also contact the Loy Association of Ireland on their website, loyassociation.ie or contact Tom Egan on 086 8245181. They would love to see more people coming into it,” the Ennistymon man continued.

“I think Gerry will go on and do very well for a long time. I don’t expect to beat him in the near future anyway. It doesn’t matter who wins, though – it is all about competing,” he concluded.
Tom Egan of the Loy Association of Ireland is hopeful about greater Clare participation in the competition.
“Gerry is a real artist of the soil, a craftsman with the loy,” Tom said.

“Tom Kennedy is also very good. There are people there competing at the national championships for 20 years who cannot do as well as they did this year. They have surpassed experienced people. They are really, very good,” he continued.
“We would have great hope for County Clare. Gerry, if he was a bit older, would be in for a veteran prize. He is currently at junior level because no one from Clare has ever won the category but, as soon as someone from the county wins junior, it is elevated to senior. Gerry will be competing at senior if he continues,” Tom said.
The special advisor explained that there are national loy competitions for junior men, senior men, U-21 men and veteran men, as well as a class for ladies.
“The oldest person who took part in the competition this year will be 80 in March. There is a girl, she just started it this year and she is 15. She got on very well; she came fourth on her first time nationally. The competition involves completing two lazy beds, 30-feet long in three hours. It is a huge challenge. You have to go fast to get the work done but you want to slow down to do it right. To get them both right is what is hard,” Tom Egan concluded.