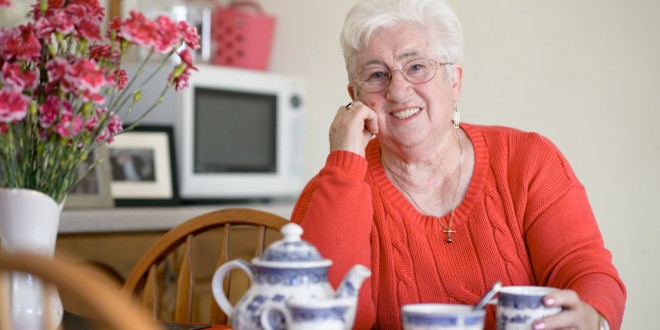 Bridie Hendrick who has been a long-time pioneer. Photograph by John Kelly.

Bridie’s 60 years in the Pioneers

HAVING been a member of the Pioneers since she was a teenager, it’s no surprise that Bridie Hendrick describes herself as “very loyal” to the organisation.

Bridie will receive her 60-year pin at a ceremony on June 12 at SS John & Paul Church, while others who have also reached certain landmarks will be recognised.

Speaking about her decision to throw her lot in with the organisation, she says, “I joined it when I was 14 in Armagh. At that time, you’d go into the probationers and the Pioneers when you were 16. There were eight in my family and we all joined. One of them broke his pledge but all the rest of them stayed Pioneers. Non-smokers and non-drinkers the whole lot. In those days, there were no women going into pubs or things and you didn’t see drink much. It was easier for people than it is now.”

While times have changed since her Armagh childhood in the 1950s, Bridie was never really tempted to drink. “I’d still find it difficult going into a pub. I’d go in maybe if there was something on or something to go to but I can’t bear looking at drink, even in the soaps and things, it annoys me. It’s just the way we were reared; we used to walk five miles to mass, trying to be there at 8am and we’d be fasting from midnight. Once a month you went on a Saturday night to confession and then back at eight the next morning for mass. It was tough, it was just the way times were but I wouldn’t change any of it. It’s tough for children today because there is so much temptation but that’s the way it is.”

She is married to Patrick, who is also a non-drinker, although he wavered for a while. “He was a Pioneer when we got married and he broke his pledge at a Pioneer’s wedding! What do you think of that?” she says laughing.

Bridie says she doesn’t mind people taking a drink but doesn’t see any sense in getting drunk. She was glad to be able to change Patrick’s mind again. “I got him talked out of it, so he gave it up a good while ago.”

She first met the Wexford man many years ago in Dublin and geography was little barrier to romance. “We met in Dublin when I was on holiday. He was over in England at the time but he was over to visit his brother. We met each other at a dance, we said we’d write and we did for a year. He came over to Armagh to see me and we got engaged. I went over to England and we got married in England.”

They moved back to the north, but moved down south due to the Troubles, even though they had no involvement with the paramilitaries. Her husband had been giving a lift to work to another man and he turned out to be a killer.

“He wasn’t our religion, he was a Protestant but a couple of days later on our door was written ‘IRA-out’ to us. We were never involved in anything like that. My father was living with us at that time and we moved down to Wexford.”

They came to Shannon after hearing about a job going in EI, which Bridie applied for and got. They now live in Inis Mhara and Bridie says they have had a great experience living in the town. “I love Shannon, I wouldn’t leave it for the world,” she says.