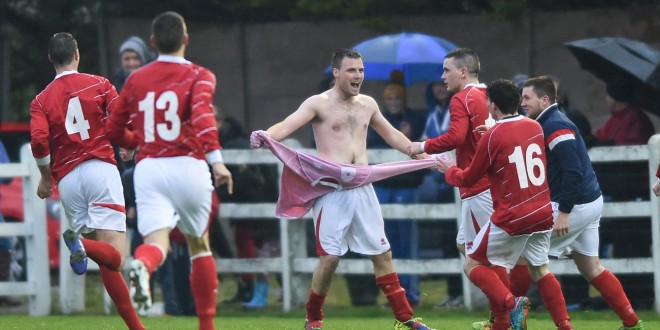 Hat trick scorer David Mc Carthy of Newmarket Celtic celebrates yet another goal against Bridge United during their Cup final at Doora. Photograph by John Kelly.

THE 2015 Prego Menswear Clare cup final had it all; great goals, red and yellow cards, unflinching commitment, a big crowd, a torrential downpour, late and even later tackles.

The contest was always edgy but laced with moments of real quality from these neighbours, both of whom were desperate to leave the County Grounds in Doora with the Clare Cup.

Late on Saturday evening Newmarket Celtic brought the cup back to their village for the fourth successive year and the 14th time in all. To say they earned it would be a rather underwhelming way to put it. The holders were 2-0 down at half time and looked bereft of ideas and hope.

Mikey McNamara put Bridge United 1-0 ahead in the 23rd minute finishing neatly after Niall Quinn failed to hold a low cross from Chris Lake.
Newmarket had dominated possession during the opening 20 minutes but hadn’t created any clear goal scoring chance.

They were hit four minutes after the first goal by a rocket of a free kick from Pa McMahon who banged Bridge United’s second into the top corner. McMahon’s goal lit up the evening and even as the clouds spilled yet more rain, that moment will live in the memory of all who paid in.

Newmarket needed to respond like champions if they were to somehow dig their way out of this one. That’s exactly what they did. The league champions and four in a row cup winners introduced Eoin Hayes, Ian Collins and Eoin O’Brien at half time and they helped Newmarket to up the tempo of their game. Collins in particular was superb on the right wing, stretching the Bridge United defence and running directly.

The half time changes also helped to bring David McCarthy more more into the game and he responded with a sublime second half hat trick.
Newmarket were simply a transformed team during that 45 minutes and showed both class and desire in a pulsating second half display.

Before McCarthy buried a 59th minute free to bring Newmarket back into it, they had a goal disallowed when Eoin Hayes was flagged offside.

Daithí O’Connell made it 2-2 five minutes later when an Eoin Hayes cross was punched at O’Connell by Bridge United goalkeeper John Mulready. O’Connell couldn’t help but score and suddenly momentum had swung irrevocably towards Newmarket.

Another Hayes assist set up David McCarthy for his second and the Newmarket number 10 completed a sensational second half display when he chipped Mulready in injury time to make it 4-2. This was as entertaining and as incident packed a cup final as one could hope for. Newmarket’s Darren Cullinan and Bridge United’s Darragh Fitzgerald were red carded in the second half while David McCarthy was shown a second yellow for whipping off his shirt in celebration of his cup final winning hat trick.