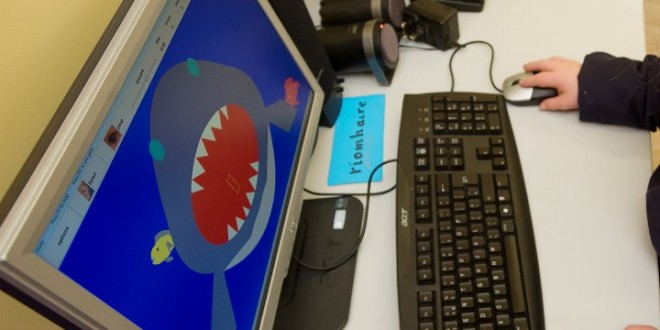 BODYKE National School is taking a giant leap forward as it plans to go digital for the coming academic year, with pupils from the age of five being given a laptop from this September.
The board of management, staff, and parents association have decided to embark on a project to ensure that every child from the age of five in this 24-pupil school has a laptop for the coming year.
The ambitious proposal comes on the back of the school being one of a number of schools in County Clare to be awarded a Digital Schools of Distinction Award earlier this year.
Colm Ó Tuathaill outlined how it came about.  “We sat down as a school, staff and board of management recently and we set about creating a new vision for the school, and that would be an e-learning vision. We could see the benefits of ICT (Information and communications technology) and we were looking at the Department of Education’s Literacy Numeracy Strategy for Learning and Life and they make reference there to literacy being more than spoken language and printed text. You now have digital media as part of it. We saw the benefits of ICT and felt if we could extend it having become a digital school of distinction and make a laptop available for every student in the school from next year on, the benefits would be huge,” he said.
Mr Ó Tuathaill said they could see that the Department of Education is preparing the way for a more technology-based strategy and felt what better way to prepare for such developments than to give their students the benefit of a head start.
“It is envisaged that from September every child in the school will have a laptop and the staff will be looking to deliver as much of the curriculum using ICT. Mr Ó Tuathaill explained that the idea is to change how the students engage in learning rather than downloading the curriculum books to tablets or laptops as this doesn’t change how the children engage with the subjects.
“There will still be some school books. The idea is that every child would have a laptop. There will be no history, geography or science books next year and that’s where we are hoping to bring the ICT in as much as possible. It is laptops rather than tablets. Tablets are great for the students but with a laptop you are engaging with more skills for instance like integrating with a process like Microsoft Office. It doesn’t matter whether you are a doctor or a farmer; all walks of life need to be able to engage with a computer and use it proficiently and what better grounding than to have that from the age of five years of age up,” he said.
While the principal accepted that the skills wouldn’t be there with junior infants initially the hope is to teach them implicitly and he believes the pupils “will find they get to know the device very quickly”.
“We’re not saying that the children will only be typing in the school, obviously we will still be teaching them to write but we see the emphasis coming on ICT in the future and see how important that will be later on,” he said.
As the fundraising for the laptops begins, the staff will embark on summer ICT related courses in preparation for a fresh start this September.
Mr Ó Tuathaill highlighted that this digital initiative has been primarily staff-led, and he commented as principal “you achieve things with the people around you in a school”. With this in mind he said the staff, board of management, the parents have all put their support behind this endeavour.
“I know we are a small school but it is everybody in the community that helps to drive it forward,” he said.
Bodyke National School has two mainstream teachers, and one resource teacher and Mr Ó Tuathaill said they all recognise the benefits going digital will have to motivate the pupils,” he said.
Separately, on Thursday, June 26, Brendan Barry, ICT coordinator at Mary Immaculate College, will present Bodyke National School with its Digital School Distinction plaque.

Carol Byrne is a reporter at The Clare Champion newspaper reporting on news in the East Clare area and the arts. She also covers the courts in County Clare and has received seven national awards for this coverage from the Law Society of Ireland and a National Lottery Local Ireland national media award for Best Community Story 2019. A Masters in Journalism graduate of NUI Galway, she also holds a Bachelor of Arts from the University of Limerick in Music and Media Studies, and a Higher Diploma in Irish Legal Studies. She began her career interning at The Limerick Leader and Clare FM, before taking up a full time post at The Clare Champion in 2006.
@@Carlsburn
Previous Luka Bloom tours the cafes of Clare
Next Kilmaley man meets Pope Francis