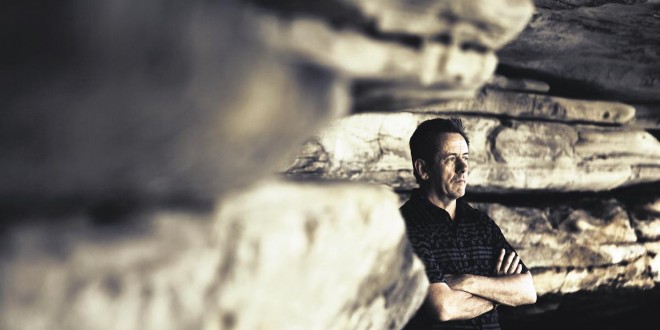 Luka Bloom could be sinn ing to you in your local café next month, as the North Clare resident embarks on his second Clare Café Tour.
As someone who thoroughly enjoys the café atmosphere, Luka Bloom decided last year to bring the music to the wonderful cafes around the county.
The atmosphere they have for an intimate gig was one reason for bringing his folk song repertoire to the café stage but, he also said, he finds the proprietors are genuinely enthusiastic about creating a warm and homely atmosphere for the guests.
Speaking about last year’s café tour, Luka said it went beyond all his expectations. “I was a little bit nervous about whether people would be open to it, and I was completely blown away. The interesting thing about the tour we did last year was that every single one of the café’s I played in last September, I don’t think one of them existed 10 years ago. They all came into being in the last 10 years at least most of them. There’s a bit of a café explosion happening all over Ireland, and I got this idea to just invite people to come into a concert not so much in a theatre, not so much in a pub but somewhere they can have a cup of tea and a piece of cake or a piece of pie and enjoy a concert and go home or go onto a pub afterwards if they want to,” he said.
He added that he wasn’t sure how it would work out last year as people generally like to have a few pints at a gig but he said he couldn’t believe how enthusiastic people were for it. “It gives me great hope for it going forward,” he said.
The chosen setting for each of the gigs has its own unique appeal and atmosphere, according to Luka and he has enjoyed the variety each of the venues has to offer both him as a performer and the audiences.
“We did the Diamond Rocks Café in Kilkee on a Monday night at the end of September and there were 120 people there. I couldn’t believe it. The sun was going down it was great. All the settings this time around are different. We are out in the heart of the Burren, and there’s the one crazy one, that’s down in Kilrush, it is a hilarious place altogether. We’ve added a few different ones this time. I play a lot in the Gurú tearooms in Ennistymon so we’ve excluded that this year.
“We are going to Mountshannon this time around so we are heading east. I’ve never sung in Mountshannon before in my life. We have to throw in, just for the craic, Gort, where I’ll play in The Gallery Café,” he said.
The idea of performing in café settings came to Luka as a way of cutting down on his frequent flyer miles. Tired of airports and travelling, he has always been looking for the perfect combination of performing close to home.
“When I moved to Clare, one of the things that I’ve always been kind of envious of is I know quite a few people who play music in Clare every night and go home to their own beds. Whereas my music in life involves going to airports and flying all around the world, so last year I got the idea of doing a tour in County Clare but I thought why not open up the café world,” he said.
Since embarking on this new touring model, Luka said it offers so much both in terms of performance, atmosphere and audiences.
“I love it and the whole idea. Because it is small venues there are no sound checks and there are no sound systems. I love the intimacy and the people are right in front of me. It is upclose and personal. I love being in a small room and I love the fact that people are sitting there drinking pots of tea, enjoying the concert. I love the idea of doing a tour like this and going home to my own bed,” he said.
Another aspect of the performance is the not knowing what the set list is going to be, as Luka says he never plans a show, and rather goes with whatever he feels like playing when he gets to the venue, as well as some requests.
“I basically walk out with zero plan. I’ve made about 20 albums now and so I never decide and I just sing whatever I feel like singing in the moment and ask people if there is a song they want to hear,” he said.
Luka added that the audiences in Clare also change with the seasons and as such they offer something different for him as a performer.
“The really great thing about Clare is you get a completely different audience in July than you would in January or February. I played in Glór in February or March and it was all Clare people, whereas in July, when I play, they will be from all over the world. Once it comes to April in Clare, you have to share it with the rest of the world. From living in Clare, I’ve come to love winter as much as summer because the locals have time to talk to you and it has a different energy,” he said.
For the time being, the café tour is confined to Clare.
As well as releasing his most recent album, Head and Heart, this year Luka has also published a book, which is exclusively available on his website and at his gigs. The book features a host of photographs, lyrics and poems by Luka and spans a 20-year period.

“Then I realised there was a connection between the images I was photographing and the songs that I was writing so I created a book of lyrics and poems and I called him Homeplace,” he said.

Luka will take his café tour to the Coast Lodge at Spanish Point, The Galley Coffee Shop in Mountshannon, The Strand in Kilkee and Burren College of Art close to Ballyvaughan.
The tour takes place from July 2 to July 9, and further details are available on Luka’s website www.lukabloom.com.

Carol Byrne is a reporter at The Clare Champion newspaper reporting on news in the East Clare area and the arts. She also covers the courts in County Clare and has received seven national awards for this coverage from the Law Society of Ireland and a National Lottery Local Ireland national media award for Best Community Story 2019. A Masters in Journalism graduate of NUI Galway, she also holds a Bachelor of Arts from the University of Limerick in Music and Media Studies, and a Higher Diploma in Irish Legal Studies. She began her career interning at The Limerick Leader and Clare FM, before taking up a full time post at The Clare Champion in 2006.
@@Carlsburn
Previous Dooley critical of inaction on mobility allowance grant
Next Bodyke National School Goes Digital