Home » Sports » Winning start for champions but Kilmurry-Ibrickane are shocked 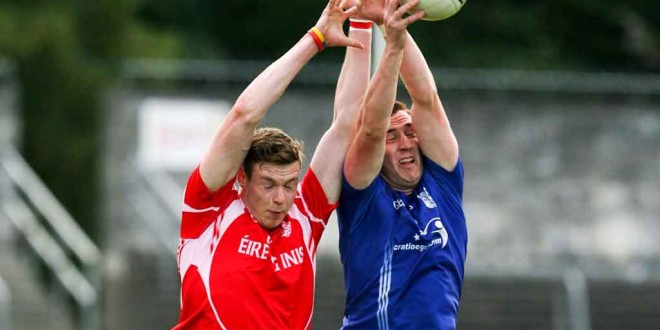 Winning start for champions but Kilmurry-Ibrickane are shocked

Clare senior football champions Cratloe got over the first hurdle in defence of the title they won for the first time last season when they accounted for Eire Og at Cusack park on Saturday evening.

However, earlier in the afternoon, the first shock in this year’s race for the Jack Daly cup was recorded at Doonbeg where hot favourites Kilmurry-Ibrickane suffered a one point loss to St.Senans Kilkee.

Elsewhere in first round games on Saturday, results went as predicted with St. Josephs, Miltown, Clondegad and Doonbeg all recording victories against Shannon Gaels, O’Currys, St. Breckans and Ennistymon respectively.

The meeting of Cratloe and Eire Og proved to be an exciting affair. Cratloe raced into a 1-3 to 0-0 lead in the opening quarter with Podge Collins scoring 1-2. Eire Og, helped by a goal from minor Dara Walsh, fought back and led by a point, 1-4 tio 1-3 with five mintues remaining in the half. They stretched their advantge to two points by half time when the score was 1-6 tio 1-4.

Cratloe hit five unanswered points in the opening eleven minutes of the second half and they went on to lead 2-11 to 1-8 with ten minutes remaining, their second goal coming from Conor Ryan.

Eire Og battled to the end but the gap was too great and the champions held on for a merited victory on an evening when Pierce De Loughrey, Ogie Murphy, Liam Markham, Conor Ryan, Padge Collins and especially Conor McGrath stood out.

The big shock of the day was caused by St.Senans Kilkee who recorded a one point (0-10 to 0-9) win over Kilmurry-Ibrickane at Doonbeg. The seasiders raced into a five point lead but this was cut back to one by half time. Try as they did in the second half, Kilmurry just could not get their noses in front and the seasiders, with Michael O’Shea hitting 0-7, held on for a favous win.

In the opening game at Cusack Park, Clondegad had a merited win over St. Breckans winning on a scoreline of 2-12 to 0-10. They got off to a great start with a goal from Shane Brennan in the fourth minute an d Podge McMahon struck for their second goal three minutes from the break to leave them 2-5 to 0-6 in front at the break,

St.Breckans battled all the way but they just could not get through for the goal they needed to get back into contention despite the efforts of Aidan Davidson, Pat Nagle and the evengreen Denis O’Driscoll. The Brennan brothers, Gary and Shane, Brian Carigg and Conor Gavin impressed for the winners.

Miltown were made battle all the way for a four point win over O’Currys in the opening game at Doonbeg. A strong finish saw the David O’Brien trained side finish 0-9 to 0-4 ahead.

In the opening game of the championship, St. Josephs Doora-Barefield had too much experience for Shannon Gaels and scored a 0-9 to 0-6 win at Lissycasey. They led 0-5 to 0-3 at half time and while the Gaels levelled early in the second half, the Doora-Barefield men fought back and scored the last three points to second a three point win.