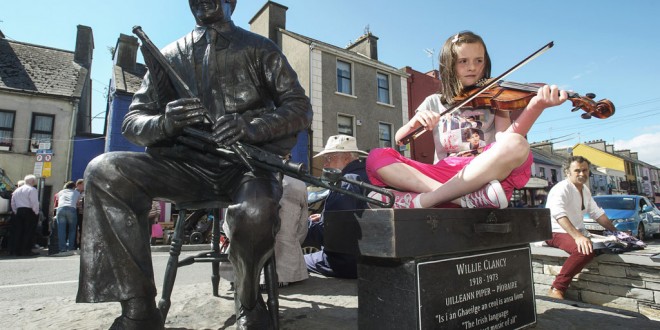 MILTOWN Malbay and the wider West Clare community continue to count the cost of the cancellation of an event whose economic value has been set at between €5 and €10 million annually. The Willie Clancy Summer School, whose cultural value is probably impossible to estimate, is among the casualties of the coronavirus restrictions. Its absence, on what would have been its 48th birthday, will be felt well beyond the Banner county. This year’s event had been expected to attract 1500 students  between July 4 and 12, with many thousands more attending for sessions, talks, seminars, dancing, concerts and the general festival atmosphere.

Administrative Director Harry Hughes described the cancellation of this year’s Scoil Samhradh as “disappointing but inevitable” in the context of Covid-19. “We had been hoping things might improve in terms of the virus, but that wasn’t to be,” he remarked. “We are very disappointed for all of our students and tutors who attend year after year and the cancellation has created a huge void on several levels.”

Outlining the economic impact of the loss of this year’s event, Mr Hughes noted that the most recent estimate by researchers at NUI Galway had set the spin off benefit at up to €10m. “Our tutors would make up a percentage of their annual income through the summer school,” he outlined. “We would also hire up to 60 students and postgraduates for between one and three weeks. The hire of all kinds of products, like marquees, and services from electricians and other contractors also makes a significant contribution locally. Then, there is the impact on accommodation providers, pubs and restaurants in Miltown, Mullagh, Spanish Point and Quilty.”

This year’s programme of events will form the basis for next year’s summer school, when Mr Hughes believes people will be in a better position to “understand the new normal”. “We had the programmes printed for this year’s event, so those are collectors items now,” Mr Hughes remarked. “We are planning, all going well, to run one weekend of talks and recitals before the end of the year. We have to be stoic. I would see this as a ‘glass half-full’ situation.”

Among those who make up a significant percentage of their annual income from the summer school is Tony Cogan of Cogan’s Bar and Restaurant on Main Street, Miltown Malbay. “I would make up 20% of my year’s turn-over,” he outlined. “That’s because most of my trade, around 90%, is food. There would be other bars where the percentage of revenue from the summer school would be far higher.” Mr Cogan said that one of the main issues was confusion over how public health guidelines would work in practice. “We really don’t know yet how the rules will apply,” he said. “Many face a major fear about re-opening. If I had to close down again, I’d be faced with the prospect of having to dump thousands of Euros worth of stock. Then, you have a situation where people can’t sit at the bar and have to stay seated at tables. Will the atmosphere be right? Will you have to put your hand up and ask, ‘An bhfuil cead agam dul amach? There’s lack of clarity and many people won’t be rushing to re-open, but Miltown is a resilient town and resilience will win.”

Hotelier John Burke agreed that the cancellation of the summer school is a huge loss on many levels. “It really is the highlight of the summer calendar,” he said. “We can never give too much credit to the organisers. Because it’s been running for so many years, everyone just clicks into action and it’s a lovely time.”

At the Armada Hotel in Spanish Point, 140 summer staff would be the normal complement, but now that’s back to just 20. “We have had to pause recruitment since March,” Mr Burke outlined. “For the summer school alone, would would normally hire an additional 30 staff.”

Priorities now for the sector include securing clarity around the nature of weddings. “We know that small wedding celebrations will be allowed from July and larger weddings in August,” he noted, “but we really don’t have clarity yet on the numbers. It’s a really big part of our summer business.” Mr Burke also listed the provision of holiday vouchers to stimulate the domestic market, as an important step forward.

Fiona McGarry joined The Clare Champion as a reporter after a four-year stint as producer of Morning Focus on Clare FM. Prior to that she worked for various radio, print and online titles, including Newstalk, Maximum Media and The Tuam Herald. Fiona’s media career began in her native Mayo when she joined Midwest Radio. She is the maker of a number of radio documentaries, funded by the Broadcasting Authority of Ireland (BAI). She has also availed of the Simon Cumbers Media Fund to report on development issues supported by Irish Aid in Haiti. She won a Justice Media Award for a short radio series on the work of Bedford Row Project, which supports prisoners and families in the Mid-West. Fiona also teaches on the Journalism programmes at NUI Galway. If you have a story and would like to get in touch with Fiona you can email her at fmcgarry@clarechampion.ie or telephone 065 6864146.
Previous Greywater project a winner for Lisdoonvarna students
Next Knockanean school plans will alleviate traffic problems say OPW