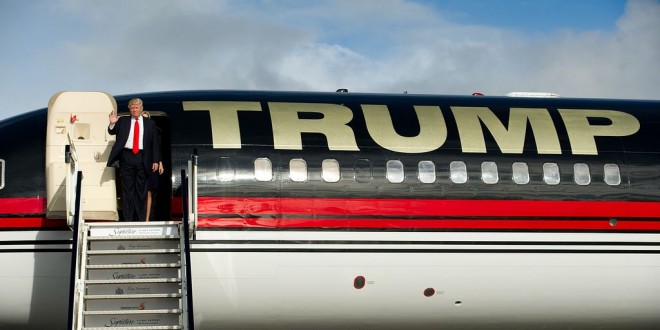 Donald Trump disembarks from his private plane after arriving in Shannon early this morning before heading to view his latest purchase Trump International Golf Links And Hotel Ireland. Photograph by John Kelly.

A SPOKESPERSON for Trump International Golf Links in Doonbeg has told The Clare Champion that a weekend visit from presumptive US Republican Presidential candidate Donald Trump is “unlikely”.

The owner of the West Clare golfing resort said two weeks ago that he was going to stop off in Doonbeg, following a three-day visit to Scotland, which will coincide with the re-opening of Trump Turnberry. He purchased that business in 2014 and has since renovated it, at an estimated cost of €250m.

Trump purchased Doonbeg, which was in receivership at the time, in early 2014. He is also expected to visit another of his Scottish golf properties in Aberdeen this week.

‘Trump Not Welcome’ campaigners, opposed to a potential visit to Ireland by the billionaire businessman, held a press conference in Dublin on Wednesday to announce details of a protest, should the New Yorker announce a last-minute visit while on his trip to the UK.

“The message is that if he comes, there will be protests,” Deputy Paul Murphy confirmed to The Clare Champion.

Deputy Murphy feels that Trump’s decision to backtrack on his plans to visit Doonbeg may be linked to the planned protests.

“I wouldn’t be surprised if it is impacting his decisions. What he would have wanted would have been a nice, friendly visit that would have helped with the Irish-American vote. But now, if there’s any possibility of instead being met with protests, it wouldn’t serve his political purpose,” the Irish Socialist TD maintained.