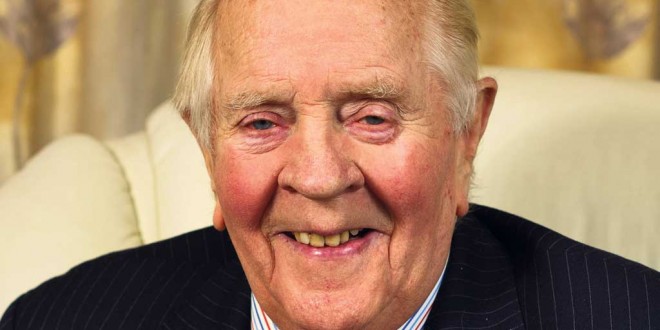 MANY tributes were made during the week to the late Michael Lynch snr, the well-known building contractor and hotelier who died in the early hours of last Monday morning at his home on Clare Road, Ennis.

Aged 85 years, he was one of the best known personalities in the Mid-West through his construction company and the West County Inn Hotel.

From humble beginnings, he pioneered a company which saw off competition to win contracts for major construction developments in the region, including the former Syntex (now Roche) Ireland in Clarecastle, the ESB generating station in Moneypoint and Irish Cement Ltd.

Born in Drumbiggle on September 12, 1928, he moved to Ballyea two years later after his father, Jim, received a divide of land from the Land Commission and built a house on it.

The second eldest of a family of nine, Mickey, as he was popularly known, attended Ballyea National School but left when he was in fifth class to start his working career carting stones for Clare County Council.

He recalled that times were tough during the war years and his early termination from school was a necessity to contribute to the growing Lynch family. His weekly wage was a big help to them on the small farm.

At the age of 17, he left the employment of Clare County Council to commence repairing farmers’ houses with his father. They went on to build a few labourer’s cottages with nothing but a horse and cart, a hack and shovel. Their dedication and skill saw them survive and when Mickey’s father became ill and was no longer in a position to travel about, Mickey moved to Ennis and employed three men.

He purchased land on both sides of the Clare Road and built a bungalow, which is now the Lynch family home. He continued to build and repair thatched houses throughout the county and progressed to winning contracts for the erection of national primary schools, the first of which was in Lissycasey.

Around that time, he saw an opening for another hotel in Ennis but his attempts to purchase and restore Carmody’s Hotel in Abbey Street were unsuccessful. Later on, the hotel made international headlines when seven people lost their lives and many were injured when the first floor of the hotel collapsed during an auction. Mickey, who was in a nearby building at the time with his father, helped to remove the injured to Ennis General Hospital.

His decision at a later date to buy four and a half acres of land at the Clare Road for £1,450 moved his dream of owning his own hotel a step nearer. Aware of the big undertaking, he first sought planning for a motel. However, with the help and advice of a number of people, he decided to build the West County Inn, with plans for future expansion. The hotel opened on April 27, 1968 with 20 bedrooms, a bar, restaurant and grill room.

Mickey, convinced of the need for another venue in the county to cater for weddings and social functions, also built a function room and added more bedrooms. His vision and that of hotel manager, John Madden, led to the West County Inn becoming one of the best-known hotels in the country. Ideally situated on the main thoroughfare linking the south and mid-west of the country, it attracted patrons from all over. It was one of the first hotels in the country to have its own heated swimming pool and leisure centre and was in huge demand for a variety of functions. It was also the venue for many memorable Clare Fianna Fáil election rallies, meetings and selection conventions, as well as election counts. With one of the most spacious hotel function rooms in the country and associated facilities, it catered for many prestigious social events from groups outside of Clare. By now, the West County had earned a special niche for itself in Ireland’s catering business, attracting thousands of people each week.

Anxious to extend the hotel end of his business, Mickey later acquired the Clare Inn, Dromoland. He undertook a major extension programme there. The hotels later became part of the Lynch Hotel Group, which employed nearly 500 at one stage.

Prior to starting his hotel enterprises, Mickey operated his own joinery business on the Clare Road. It was the start of his hugely successful building contracting business. For over 50 years, the firm gave welcome employment to many people from Clare and elsewhere, some of whom went on to start their own businesses.

A proud and generous Clare man, a man of vision and a hard worker, Mickey always insisted on high standards and was known to be on site every day for all of his building projects. Over the years, his firm won awards for excellence.

Despite his success, Mickey always remained a family man and was always conscious of his rural background. He had many friends and one of his favourite trips on a Sunday morning was to pay a visit to Tom and Pauline Killeen’s bar in the Market area of Ennis to have a drink with old friends from the Ballyea-Kilmaley areas, as well as a few townies.

He married the former Christina Malone from Templemaley, Barefield and over the years, she was a great advisor to him in all his undertakings. Mickey was a life-long supporter of Fianna Fáil and welcomed various taoisigh and government ministers to the West County Inn Hotel.

In failing health in recent months, he died peacefully at his home on the Clare Road in the early hours of Monday morning, surrounded by his wife and family.

Large crowds came to pay their final respects for reposing at his home on Wednesday and again at the funeral mass in Ennis Cathedral on this Thursday. Burial was to Drumcliff Cemetery.