Home » News » “This is unprecedented” – Clare shut down by snow 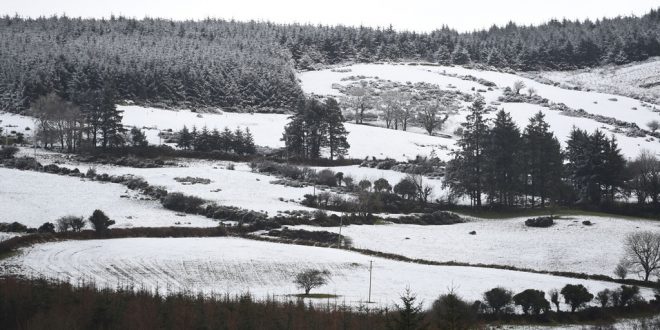 Fresh snowfalls on the hills of East Clare. Photograph by John Kelly.

CLARE has experienced its most severe snowfall in decades, with virtually all parts of the county badly affected.

Commercial life in the county was almost non-existent today, with many businesses closing and few people leaving the safety of their homes. Shannon Airport is closed until tomorrow morning, while the annual Ennis Book Club Festival, which was due to be held this weekend, has been cancelled.

This afternoon all but a handful of businesses in Ennis town centre were closed. Very few vehicles made their way into the central parts of the town, and some of those that did were clearly struggling with the conditions. With inches of snow lying on the footpaths it was also very difficult for pedestrians.

“I’ve never seen the likes of this before,” said Councillor Joe Cooney, of the conditions around East Clare. “A number of roads are impassable today and will be tonight as well,” he added.

In the west of the county things are as bad. “In all my life I’ve never seen anything like it before. You have snowmen built right on the actual coastline! The biggest problem here has been the drifting,” said Miltown Malbay based Councillor Christy Curtin.

“I well remember the snow in 1982, but this is unprecedented,” he claimed.

Clare is now one of a number of counties under a status orange alert from Met Éireann, which is due to last until 9am tomorrow. At the time of writing the County Council are using snow ploughs and gritter trucks to clear snow on the N67, N68, R352, R463 and R474. In a post on Twitter, the council said, “We have successfully cleared snow from approximately 400km of National Secondary and prominent Regional Roads today and have rendered them passable-for the moment. More snow is forecast overnight.”

Shannon Airport is due to reopen at 5am tomorrow morning and a spokeswoman said that a significant amount of work has been done to combat the snow. “Our airport snow crews were out ploughing the runway and taxi-ways all day today in severe weather conditions. Their efforts have proved successful and we are now clear to resume full operations from tomorrow morning, weather permitting.

“However, we strongly advise passengers intending to fly from, or travel to, Shannon Airport tomorrow to contact their relevant airline or check their website before travelling to the airport.

Bus Éireann has said it hopes to resume some services tomorrow, but few details are available as of yet.

Owen Ryan has been a journalist with the Clare Champion since 2007, having previously worked for a number of other regional titles in Limerick, Galway and Cork.
Previous Dooley says Government ‘blurring lines’ between journalism and advertising
Next Orange alert until 6pm