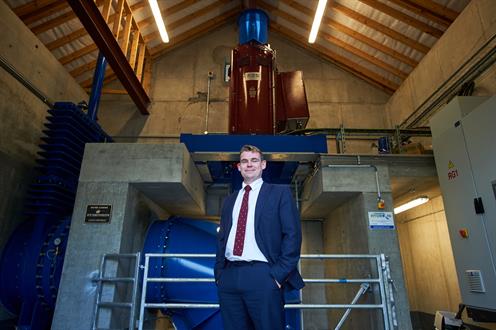 The power of water runs the Falls

HOW do you run a 145 bedroom without any electricity costs? It’s quite easy, in fact, when you can harness the power of water from an iconic cascade in the heart of Ennistymon.

A recently commissioned 220 kilowatt water turbine is providing the Falls Hotel with 100% of its power, and even generates surplus to requirements, during periods of heavy rain. The cascades, which begin just below the bridge crossing the Cullenagh River, in the oldest part of the town, roar like thunder in full flow and are a great tourist attraction.

In July, the historic Falls Hotel will have an opportunity to gain big publicity as 80 rooms have been booked by international media covering the Irish Open, something that assistant manager, John McCarthy is looking forward to.

“Apart from the media, we are full for the Open and that is good news for us and the town and the general area. People won’t spend all day in the hotel; they’ll wander around and go into shops, restaurants and pubs. Hopefully the media might do something about the turbine,” he said.

The Falls Hotel, once the home of the Macnamara family, is synonymous with innovation. In the mid 1930s, Francis Macnamara decided to turn the property, then Ennistymon House, into a small hotel. Brendan O’Regan, who later pioneered catering and duty free services at Shannon Airport, leased the hotel during the years of World War Two. One of his local innovations was to supply hot meals in hay boxes to the golfers at Lahinch.

The hotel went through a number of hand up to the 1950s before coming under the ownership of Bridget and John F Woods, who had a great interest in science and engineering in general. He recognised the potential of the waterfall to generate electricity to serve the needs of the small hotel and he built the structure to house the turbine, which he acquired second-hand. A fish pass was also built at this time. Their son, Tony and his wife, Meg followed in the business.

Dan and Eileen McCarthy acquired the hotel more than 30 years ago and, while the character of the original building has been preserved, it has been greatly expanded and enhanced to include 145 rooms, 10 apartments and a lodge, as well as swimming pool and spa. Now their sons, Michael and John are at the helm as manager and assistant manager respectively.
John recalls that Mr Wood’s turbine was still working away up to about 20 years ago.

“I was a young lad at the time but I remember it. It was able to generate electricity for a 20 bed hotel but when the Falls starting expanding it wasn’t suitable any more,” he said.

John detailed how the new water turbine had been part of the hotel’s development plans for a long.

“There were lots of things we did over the years, which pushed back the turbine. We got the plans in place about seven years ago and turned the sod two years ago. There were issues with the fish pass but everything was built to agreed specifications. The pass had to be extended for about 10 metres and he have ensured salmon and eels can pass safely without being sucked into the turbine blades,” he said.

Explaining the capabilities of the turbine, John said the 220kw machine could provide for “60 to 70% of the hotel’s annual energy needs. In winter this can reach 100% and even more, so we can give 50kw back to the national grid. That’s the cap at the moment but we are hoping this can be increased.

We did a number of trial runs in late October/November before putting the system into full use from the beginning of December.

“We have calculated our figures based on the mean annual rainfall over the past 20 years. That’s a good guide, it balances floods and droughts. We have estimated that the our system, which is fully automated and needs minimal attention, will have an annual output of close on one million kilowatts,” he said.

On last Friday afternoon, February 1, the turbine, which is housed in an impressive stone building, had generated more that 210,700kw since start up. For the day it was reading at more than 2,300kw and running at the rate of 90kw per hour, following a spell of heavy rain in the preceding days.

John said the family-run hotel should be able to avail of “spare electricity” through their on-going upgrade plans. Size wise, more rooms are not an immediate priority but a makeover for 50 ensuites will leave them ready to use from a new heats pump and recovery system.

Recently members of the Irish Hydro-power Association visited the Falls to view the turbine and were very impressed, according to John.

“We are buying into the idea of being as protective as possible of the environment. With our water power and the river walk development, we are heading in the right direction. I think we may have been judged for an environmental award, so I hope that will achieved,” he said.

You can run a 145 bedroom hotel in Ennistymon without any electricity costs.
Previous Clare Look To Build On Positive Start To LGFA National League
Next New facilities for Lees Road in Ennis