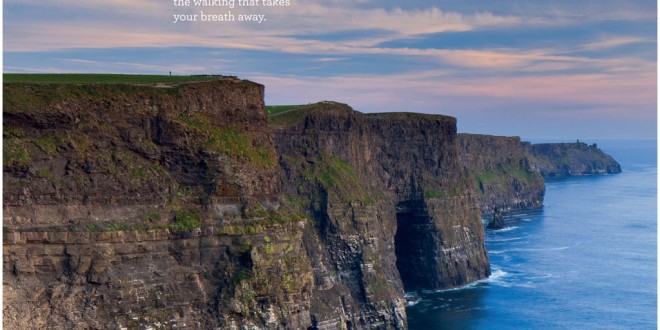 THERE is huge demand to visit the Cliffs of Moher, which actually exceeds the capacity of the existing infrastructure, Clare County Council members were told at a special briefing on Monday.

He said the attraction needs to be sustainable, both environmentally and economically, and that it is still getting busier. “The graph is going uphill and more and more people will want to visit the Cliffs of Moher,” he added.

He said that Ennis hotelier Allen Flynn recently visited the Galápagos Islands and four people who he met there mentioned the Cliffs of Moher to him, when they heard he was Irish. “It’s a huge international asset and it gives tourists a very compelling reason to visit Clare.”

In terms of the environment, he said there is a need to be mindful of people who live in the area. Mr Kerr said a shuttle bus was on trial last year from May to September and it had been a “great success”. He also said there are plans to invest in water treatment and traffic management.

Ms Enright said that visitor numbers reached 1,605,131 last year, up 1.57% on the previous year. Figures she presented show that 56% of visitors to the attraction now are what are known as fully independent travellers, with the remainder travelling in tour groups.

Nationality data for visitors in 2019 was also given, showing that 30% of people came from North America, 11% from Ireland, 7% from the UK, 9% from Germany and 6% from France. Of the remainder, some 18% came from other parts of Europe, 10% from Asia, 5% from Australia and 5% from South America. The combined figure is above 100%, due to rounding.

Ms Enright said that it was the first time in a decade that there had been something of a fall-off in group visitors, while she said there is “a strong reliance” on the international market.

She also said that they are trying to attract the “right visitor”, one who will stay in the county for longer.

The fact that the amount of demand exceeds the capacity of the existing infrastructure is a “huge challenge” she said and there is a need to make sure the facility develops in the correct way.

Some pieces of infrastructure that are said to be required to meet the demand include a coastal walk 2km zone, a wastewater treatment facility, redevelopment of the car park, a gateway and underpass, additional building and park and ride facilities.

Councillor Shane Talty said it was “most encouraging” that 56% of visitors are fully independent travellers and this is contrary to the popular narrative that visitors to the Cliffs are just people coming on buses from Dublin.

The Green Party’s Róisín Garvey said that dividends accruing to the council from the success of the Cliffs need to be put back into the local area, while she also questioned what profits have been made in the last couple of years.

She also said there is a need for a cycle lane to serve the Cliffs. “The slower people move, the more money they spend,” she claimed.

Councillor Garvey criticised the social media profile of the Cliffs, saying it has only 6,000 followers on Instagram. “That’s only three times what I have and I’m not the leading visitor attraction in Ireland.”

Fianna Fáil’s Joe Killeen said that the impact of cars visiting the Cliffs on communities in the region needs to dealt with and there is a need for measures such as pedestrian lights and crossings. “We need to see a spin-off to help support the communities,” he added.

Responding to some of what was said, Mr Kerr said the Cliffs of Moher board would be an open book in terms of transparency. “We’re just the custodians,” he said of one of the country’s most prominent natural attractions.

Owen Ryan has been a journalist with the Clare Champion since 2007, having previously worked for a number of other regional titles in Limerick, Galway and Cork.
Previous Keegan Looking Forward To Wexford Challenge In Oscar Traynor Quarter-Final
Next “We Are A Work In Progress But The Squad Is Building Nicely” – O’Halloran