Home » Breaking News » “Thank God for modern technology, it helps you to reach out” 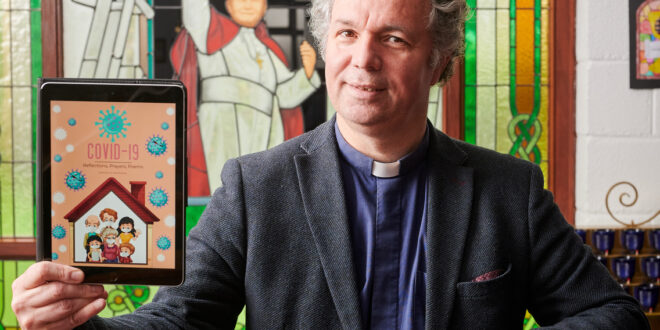 Fr Arnold Rosney, PP Shannon who has edited a book entitled Covid-19 Reflections, Prayers, Poems. It is available on www.amazon.co.uk with all proceeds going to Clarecare Shannon and the Cleft Lip And Palate unit for Children in Dublin. Photograph by John Kelly.

“Thank God for modern technology, it helps you to reach out”

A DEFINING part of many Clare people’s weekend is attendance at mass, but that will not be the case for the next three weekends at least, as the county and the country are again under tighter restrictions.

As was the case earlier in the year the devout will be watching the ceremonies through electronic devices as part of the national effort to limit the spread of the virus.

“On one hand while we’re not surprised, we are that it happened so quickly, being locked down at pretty short notice. We’re gone to phase 3, it is what it is, it’s the reality and maybe it’s a reminder to everyone to up their game a little bit and look out for everybody,” said Shannon parish priest Father Arnold Rosney on Tuesday.

He said that people can still go to their local places of worship. “Public masses are on hold for the three weeks but the churches are still open for private prayer. The experience in Shannon has been, and I’m sure it’s the same in lots of other places, that a lot of people had been coming back and getting into the routine of mass, and while that’s paused I’d encourage people to continue visiting a church on a regular basis, to keep that routine. I think it’s important that people’s own spiritual wellbeing is nourished.”

One of the hardest aspects of lockdown was the 25-person limit on attendance at funerals.
It is a huge change from the traditional funerals, many of which would have several hundred attending over two days.

While Father Rosney said that it is a huge change, he feels it does have to be accepted. “It’s very challenging. It’s not something we’re used to, we’re used to celebrating a person’s life, we’re used to visiting the home, we’re used to lining up outside funeral homes, we’re used to full churches for people who are well known, but this is a new normal, a new reality. We have to get used to this going forward. As I often said before I think we need to look at new ways of being church, how we can minister to people, how we can present the Gospel in a new way and we’re doing that in many parishes through social media, through technology. As much as we would love the one-to-one, meeting people in their homes and so on, that’s not practical right now in many respects. We need new ways of ministering.”

He said that some people still hadn’t had the confidence to attend church since the initial lockdown ended and he urged people to support one another in the coming weeks. “This pandemic isn’t going away, and we need to look out for others who are nervous and those who are vulnerable. We need to do all we can to support them as best we can.”

In the Imeall Boirne cluster of parishes in North Clare, Father Damien Nolan says people are upset, but understanding of the decision to move to the third level. “There is a certain amount of disappointment there, people had been so accustomed to coming along again. A lot of people had been coming on weekdays and they were a little group in themselves, who would be there for the weekday mass. That was probably their outing for the day and now that’s taken away from them, so there will be a lot of disappointment. I think there’s a realism also, that something had to be done. You’d feel sorry for people who had organised weddings and different ceremonies like that, everything has been thrown up in the air for them again.”

Ever since the lockdown began they had moved to showing masses online, and every morning one will be shown from the pastoral area at 9.30am. “Either Father Pat or I will be celebrating mass behind closed doors and that’s highly unusual, it’s surreal when the doors are closed and you’re celebrating mass. You’re still trying to connect to people who are in their homes.

“Thank God for modern technology, it helps you to reach out.”