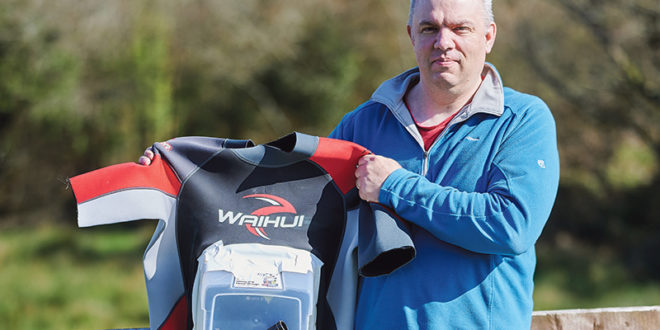 Alan Bell, originally from England, but now living in Kilnamona with a basic prototype of a ventilator he has made. Photograph by John Kelly

A LOCAL software engineer has devised a preliminary version of a ventilator, which may prove to be useful to Covid-19 patients that are not critically ill.

Pending official approval after a series of medical and other testing, Alan Bell came up with a prototype, which has the potential to be very beneficial to patients in view of the chronic global shortage of ventilators.

Originally from just outside London, Mr Bell, has been living a few miles from Ennis for more than a year.

Looking at the Covid-19 problem, Mr Bell decided to come up with angles on this issue that are a bit less obvious and apply a bit of lateral thinking to it. The two areas were air quality and a new variant of an old ventilator.

He believes if local air is improved by everyone temporarily switching from solid fuel fires to electric heaters for secondary heating, that would improve the particulates and stop the evening smoke problem in Ennis.

He explained that poor air quality exacerbates conditions like pneumonia, so more people would be able to cope with Covid-19 at home, rather than in hospital.

The second area is the shortage of ventilators. Many people are looking into making things like manual bag ventilators.

However, he thought he would look at a totally different approach. Rather than pushing air into the patient, lowering the pressure around the patient, like the old iron lungs did for polio victims.

There is a variant of the iron lung called the Cuirass, where just the chest is depressurised. This looked interesting and relatively safe, compared to approaches where stuff goes into or around the patient’s mouth.

He found a few items around the house that he put together to try it out, using a wetsuit, a box and an airbed pump with a small amount of electronics to control the pump. It worked.

Having put together a concept prototype, he contacted an international group called Helpful Engineering, collaborating on ideas around the Covid-19 problem.

An anaesthetist-led team in Australia were interested in similar approaches and they are exchanging ideas and designs. They have successfully tested their variation on a mannequin in an operating theatre and, after ethical approval, on a healthy awake volunteer.

It was done in theatre, so the breathing of the mannequin and human could be monitored using a full ventilator to measure flow rates. A similar group in Seattle are looking at how they would approach it too.

“The key advantage of this design is that it doesn’t really require specialist medical manufacturing. It consists of a vacuum-formed shell and some careful plumbing but no equipment or pumped air goes into the patient.

“It certainly isn’t as good as a proper hospital ventilator but a lot of people will be just on the dividing line between being able to breath unaided and not breathing unaided and if it could keep those people off ventilators, then that might be helpful.

“I don’t know whether this will help in the current pandemic, which is advancing rather fast. Maybe it will be something that can help in future situations, where there could be a need to supplement the main stock of ventilators,” he said.