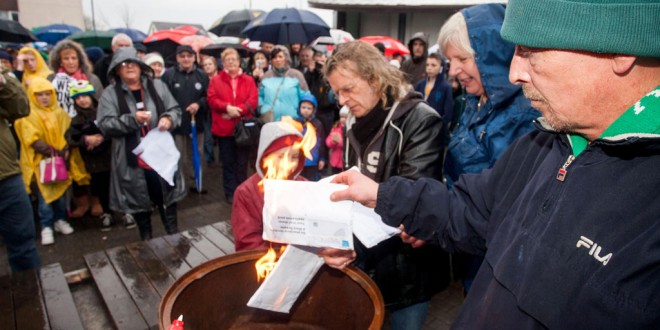 November 3, 2014 Comments Off on Anti-water protests in downpour

Ironically, the weekend’s anti-water charge protests in Ennis, Shannon and Limerick, and indeed many other places around the country, took place in torrential downpours. However, this didn’t dampen the spirits of the estimated 1500,000 protesters, who sent a clear message to the Government that Irish Water is not the way to go. The Ennis protest began at O’Connell Square where speakers addressed  the protesters before the marched up the street and turned into Carmody Street and wormed their way back to the Square. Residents from a number of housing estates marched to the town centre area of Shannon, where the protest included the burning of notices from Irish Water. Several communities from South East Clare were well represented at the largest protest in the Mid West in Limerick city.