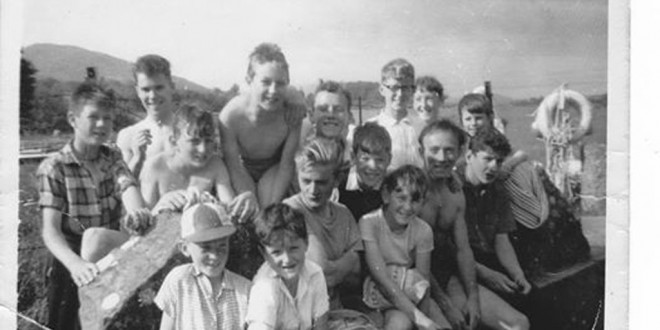 Swimmers at Pier Head, Killaloe in 1961.

A KILLALOE resident has helped a local author to solve the mystery about the swimming instructor and one time town mayor “who couldn’t swim”.

Henry Murdoch, who grew up in Ballina and Killaloe in the 1950s and ’60s, described the impact of great characters, such as Peter Lacy, in his recently published book Remembering Killaloe.

Peter Lacy taught a huge number of children to swim, including Henry, at the Pier Head in Killaloe in the 1950s.

Working as the local painter and decorator, Peter lived in Canal Bank Cottage, near the author’s dwelling in Aillebaun House. The extraordinary thing was that Peter was not able to swim himself. At least, that is what he told everyone and everyone believed him.
But that did not prevent him “going for a swim”, which he did by diving in at the step at the Pier Head, twisting around while under water, to emerge back at the step without a stroke.

Peter taught Henry how to swim, using the local river reeds under his arms as a floatation device. His older brother, Bill and his younger brother, Larry had both learned to swim in the sea at Kilkee in 1948, where the family previously lived.

Peter’s legacy is recognised in a plaque at Pier Head. It states Erected by the members of St Lua’s Swimming Club to the fond memory of Peter Lacy, founder member of the club, who dedicated much of his life to teaching boys and girls how to swim.

Elected as club president in 1981, he was described in the Nenagh Guardian on February 14 as the ‘Mayor of Killaloe’.

Most people did not believe Henry when he told them that he, and many other young people in Killaloe, were taught how to swim by a man who could not swim himself.

During his research for Remembering Killaloe, Henry checked his recollection with several locals, who all confirmed Peter couldn’t swim.

It was also confirmed in Phil Edmonds 2009 book on Killaloe, Reconnecting with the Soul of Ireland, where he outlined Peter graduated from using reeds to a harness with a rope, until his students were ready to swim without support.

Phil and Dick Edmonds are sons of the late Eddie Edmonds, who, with his two brothers, established in 1938 the private secondary school in Killaloe, St Senan’s, later to be amalgamated in 1968 with St Anne’s Secondary School, now St Anne’s Community College.

Shortly after the publication of his book last June, Henry was contacted by Mark Quigley, a grandson of Jack Quigley, who told him that very few people knew that Peter could actually swim.

Mark explained, “I would imagine that telling people he couldn’t swim was so that he wouldn’t end up having to get in the water with his students or to dissuade them from pushing him in”.

Mark produced a copy of the brochure for the Killaloe Regatta of Monday, August 7, 1939, where Peter was one of the nine entrants for a 100 yard freestyle race.

The Clare Champion newspaper archives in the National Library in Dublin revealed a brilliant description of the regatta, written in the rather quaint language of the time. It was won by P Courtney and second was Michael Hayes. The list of entrants included P Lacy.

In September 1939, World War II was declared. Years later, Peter decided it was in his best interest and in the best interest of his swimming pupils, to declare that he could not swim, but that he could teach anyone to swim, which he achieved with aplomb.

He made an enormous contribution to the local community throughout his life. When he died on August 30 1986, aged 75, the headstone on his grave in Killaloe Cemetery was erected by members of St Lua’s Swimming Club.

Even though the mystery is now solved, Henry admits Peter “fooled a lot of people for an awful long time”.

Remembering Killaloe, a memoir, and My Killaloe, a guidebook, were published by The Liffey Press and are available from bookshops and online at www.theliffeypress.com.

The author’s royalties go directly to the charity, the NRH Foundation, for the benefit of the patients of the National Rehabilitation Hospital, Dun Laoghaire, Dublin.