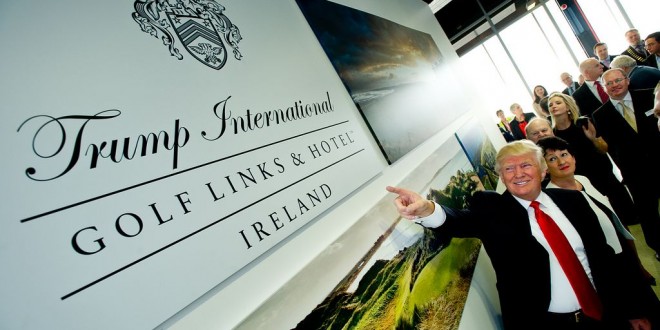 AN Taisce has made a submission to Clare County Council in respect of a planning application for coastal erosion management works at Carrowmore Dunes, White Strand, Doughmore Bay and Trump International Golf Links and Hotel, Doonbeg.

The applicants are Trump International Golf Links Ireland Enterprises Ltd, headed up by business tycoon, Donald Trump, who will be the Republican Party candidate in the US presidential election in November. He is due to visit Doonbeg on Sunday, June 24.

Commenting on the submission, Fintan Kelly, An Taisce’s Natural Heritage Officer, stated, “The solution being put forward by Trump International Golf Links Ltd is in our opinion inappropriate, completely unsustainable and outdated. The conservation of sand dunes in the Netherlands, USA and UK have proven themselves to be more cost effective than hard coastal protection works and are supplying valued biodiversity and ecosystem services to local communities.”

“Given the vast sums of money Donald Trump is claiming he will invest in Doonbeg Golf Course it is clearly within his means to reconsider the design and make Doonbeg great. A holistic approach to the management of our coastline must be taken if they are to remain resilient to climate change,” Mr Kelly added.

An Taisce’s submission states, “For generations the dunes near Doonbeg have protected the land behind them from coastal flooding at no expense to the taxpayer. They have provided a recreational space for tourists and locals alike, and support globally threatened wildlife. All of this, however, is under threat as the Donald Trump owned Trump International Golf Links seek to build monstrous coastal protection works, which will destroy the sand dunes and blight one of the most stunning stretches of coast in the country.

The sand dunes are now in a perilous position as the life is being squeezed out of them on one side by the inappropriate design of the adjoining golf course and its management, and on the other side by the proposed construction of coastal protection works which would lock the dunes in place and starve them of the sand which is vital for the ongoing survival.

Trump International Golf Links have put forward that coastal erosion is the greatest threat to the dunes and that their coastal protection works will ultimately save the dunes and protect the golf course and farmland inland. This is completely false as the sand dunes have adapted and shifted in response to erosion for millennia. Dunes are naturally dynamic systems and will retreat and advance in response to erosion. The dunes are currently being prevented from retreating by the inappropriately sited and designed golf course which should be realigned to allow the dunes to respond to rising sea levels.