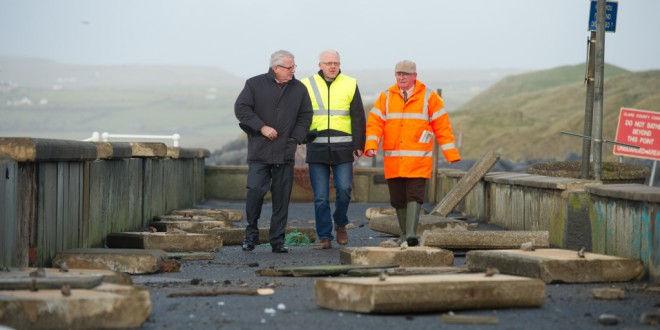 Storm and flood warning for Clare

STORM and flooding expected this weekend could be “as extreme” as earlier this month, a senior Clare County Council engineer warned on Friday.

Clare  County Council issued a flood and storm warning on Thursday for the entire county in advance of severe weather conditions that are expected over the next few days.

“Storm and flooding activity is likely to be most severe in coastal areas including the Shannon Estuary where the high Spring tide of early Saturday morning will coincide with a substantial tidal surge and severe on-shore Westerly and South Westerly winds – conditions then will potentially be as extreme as they were during the coastal storms of early January,” Mr Tiernan stated.

“In addition, this mornings rainfall has added significantly to already high river systems.  There may be further downpours also and this in addition to the tidal conditions will increase the risk of local flooding at various locations inland,” he added.

“The advice is not to venture out unless necessary – particularly in coastal areas.   Be extra careful when driving and don’t park vehicles in close proximity to exposed coastal areas.   Any areas which have previoiusly flooded are at risk and people in such situations are advised to take appropriate precautions,” he added.

Flooding advice is available on www.flooding.ie.