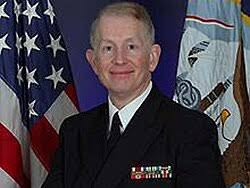 Although born and raised in Connecticut, Dr Brian P. Monahan, the physician who recommended the measures to be implemented in Capitol Hill, the seat of the US Government, in the battle to prevent the spread of the Covid-19 pandemic, has family ties firmly embedded in West Clare.

Both his parents emigrated from Clare in the mid 1950s, his mother Mary (Troy) from Doonaha West and his father Martin from Glaunagonee in Lissycasey. Although less that 40 miles separate both villages, the couple actually travelled half way round the world before meeting up, getting married and setting up home in the States.

A 59 year-old Navy rear admiral and the attending physician of Congress, Dr Monahan was described as the calm and professional voice of reason during the pandemic. He is known in the halls of the Capitol as much for his meticulous attention to medical detail as he is for his efforts to stay completely out of politics.

His first cousin Michael Troy, who, by a strange coincidence, grew up in Kilbaha West but now lives in Lissycasey, remembers Dr Monahan as being “a very smart, very interesting but reserved individual.”

Michael was also able to trace how Dr Monahan’s parents came to cross paths in the States having departed West Clare in the 1950’s to pursue a better life for themselves.

“My aunt Mary she grew up in Doonaha West. She had two siblings, my father who was the youngest and an older brother. She went to national school in Doonaha before boarding in Cahercon for four or five years.

“She came home from Cahercon on weekends and I remember my father telling me that he used to have to go into Kilkee on his bicycle to meet her and bring her home. One would cycle the bike for a couple of miles while the other walked. The person cycling would throw the bike into the ditch for the person walking behind and would set off on foot. They kept swapping over that way,” he outlines.

After Mary finished her schooling in Cahercon she took up employment in Doherty’s Timber Yard in Kilrush for a few years, cycling roughly 30 miles to and from work each day.

“She worked with Vincent Crowley’s late wife. They were good friends and they maintained that friendship throughout life. She did a couple of years in the timber yard cycling in and out from her home to Kilrush. It was a nice hike.

“Mary’s aunt, she was called ‘The Queen’, was elderly and she lived in Bridgeport in Connecticut. She had a big house out there. She was getting on in years and she asked would Mary be interested in coming out to America to look after her. She’d give her a place to say and whatever else so Mary went out to Bridgeport,” he recalls.

Subsequently Mary inherited that house after her aunt passed away.

“Sometime around that time she met Martin in an Irish club and they got together and later married. They had four children. Brian was the eldest, he had a brother Kevin, an eminent cardiologist, and two sisters, Kathleen and Ann. They all did very well for themselves in life,” he adds.

Martin worked in a lot of different jobs after going to the States. “He worked in security, transporting money from bank to bank. You couldn’t say he was qualified in one particular trade but he worked a lot of jobs over the years. In America that’s the way it goes, you work in a job and then move on.

“Mary worked in Fairfield University. She had a secretarial role there, a good job and she put all her kids through that university,” he says.

The first in his family to attend college, Brian worked full-time at a supermarket while commuting to Fairfield University. He studied biology and chemistry, and after graduating, joined the Navy through its Health Professions Scholarship Program, enticed in part by the offer of free tuition and a living allowance in exchange for a commitment to three years of service.

Dr. Monahan rose through the ranks of the Navy, becoming a professor of medicine and pathology at the Uniformed Services University of the Health Sciences in Maryland, as well as participating in a number of national organizations related to cancer, oncology and hematology.

In 2009 he became the seventh man to serve as attending physician, taking up a position that has always been held by a Navy doctor.

He has since become a fixture on Capitol Hill, participating in congressional trips and functions and releasing health assessments for presidential and vice-presidential contenders, including Senators Bernie Sanders and Tim Kaine.

“He has been a doctor for a lot of senators. I remember him telling me that he looked after Ted Kennedy at one stage. He would have been rubbing shoulders with a lot of powerful people,” Michael adds.

Dr Monahan, his wife Mary and their four children enjoyed a family holiday in Ireland back in 1983, visiting West Clare and meeting their relatives.

“I wouldn’t have met Brian since 2013 when I went out for his mother’s funeral. She passed away in January of that year and her husband two years later. I wouldn’t say he was terribly interested in tracing his ancestors as other members of the family were.

“One of Ann’s sons is very interested in genealogy and he has the whole family tree mapped out. Brian himself never really asked a whole lot of questions, he didn’t seem to be awfully interested in it.

“I remember at his mother’s funeral he asked me what was his grandmother on his mother’s side, what was her maiden name. He asked because he didn’t know. I thought that a bit funny,” he suggests.

Michael actually lived in Connecticut from 1989 to 1994 and met with his cousins for family occasions.

“I lived for five years there myself. I would have met Brian for Thanksgiving, Christmas, at graduations, weddings, all family occasions. I found him a very reserved individual, a very smart kind of a guy,” he adds.

“Surprisingly he has very few relations in Kilbaha and Lissycasey. My father came from a small family, both his siblings emigrated. All the people before him, aunts and uncles did the same. His aunt lived until 89, that was the closest relative Brian had.

“On the Monahan side, the only living one is Ann and she’s in American. There was a big family of them, they lived up the road by the Boree Log. First cousins TJ, Murty, Thomas and Marty live there. They have a sister Mary living in America as well,” he outlines.

While Michael has lost contact somewhat with his esteemed cousin, his sister Nuala Daly, who lives in Knocknagarhoon, stays in contact and is friends with him on Facebook.

She recalls that on one visit to West Clare, Brian attended a disco in Kilkee.

“He came over when his parents and my parents were alive. They’ve all passed now,” she says.

“As a young fellow he came to the home place in Doonaha and my father, Jimmy brought him down the field to my grandfather. My father asked ‘who’s this young fellow?’ and my grandfather replied ‘Jesus I haven’t a clue but he’s a Troy anyway’.

“That was the only story I really remember about him apart from him attending a disco in Kilkee as a teenager. He was well older than me and it would be my older siblings who would remember him better,” Nuala reflects.