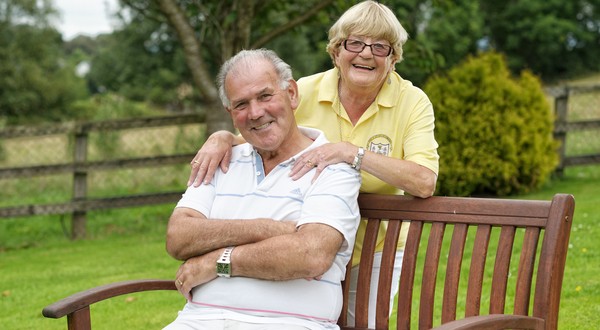 Show put Bridgetown on the map

ON a cold winter’s night in Ginivan’s Bar in 1989, a handful of locals held an impromptu discussion on what new venture would attract people to Bridgetown.

A gymkhana was proposed and 52 people attended the first meeting. Following a decision to hold an agricultural show, the inaugural event in 1990 was packed to capacity. In fact, it was such a success, it earned €6,000 for the organising committee.

Ed Ginivan, one of the co-founders, said this windfall helped the committee get the show off the ground and it continued to develop and grow over the next three decades.
“No one heard about Bridgetown until the show started. It put Bridgetown on the map, particularly for people connected with jumping and showing horses, as well as cattle,” he said.

A number of volunteers, including Ed and his wife, Eileen, decided to take a back seat recently from the organising to allow new blood to rejuvenate the show. However, they are still willing to lend a helping hand for the 24th annual South-East Clare Show, which will be held at Bridgetown Showgrounds on Sunday.

“The new group, which came in at the last AGM from all over East Clare, from new places like Broadford and Kilkishen, are terrific. There are 30 trade stands at this year’s event, which we never had before and that is great to see.

“After 25 years, we had started to run out of new ideas and the only thing that would have suffered was the show.  With new ideas, the show will be bigger and even better this year.
“We were afraid that people were beginning to see the same thing all the time. If it had kept going the way it was, without new members, we would have had no show in five or six years’ time. We didn’t want the surplus fritted away.”

Having joined the gardaí in 1959, the garda sergeant retired in 1989. One of his highlights was meeting President Eamon de Valera coming out of his cottage in Bruree in 1962. While Eddie, who was in his early twenties, was in two minds as to whether he should get off his bicycle while he was on patrol and say hello, he dismounted and started off a conversation in Irish.

“President de Valera appreciated the fact I took the time to stop and talk to him. He asked me had I the fáinne. I hadn’t completed the fáinne exam at the time.
“I did my fáinne exam with the president as the judge. A few weeks later, I got a card penned from a Limerick Deputy Donnacha O’Brien with a new fáinne, which I still have kept as a momento. It also included a note ‘Comhghairdeas, Eamon de Valera’,” he recalled.

Like most members of the gardaí in his early years, the Castletownroche native worked as a bull licence inspector, a school attendance office, a noxious weeds inspector, crime detection, taking the census and other jobs that are no longer completed by gardaí. His mode of transport at the time was a bicycle. This gave him face-to-face contact with people he wouldn’t have normally had contact with if.

This was in sharp contrast to a few stints of border patrol in Northern Ireland, which included being fired at by the IRA when he was an unarmed gardaí at a checkpoint between the armed Republicans and the advancing British Army. A 303 bullet cut a stone, which ricocheted off Ed’s hand, after he had scaled a wall to escape the gunfire.

His last 10 years was spent as a tutor in Limerick City, completing in-service training on law and general procedure for 1,000 gardaí and 250 sergeants from five divisions, including Clare Chief Superintendent John Kerin.

“I loved it because it was like a field of battle answering so many different questions. At times it was like cat and mouse because some of the sergeants in my own rank were trying to catch me out. Some of the them went on to become Garda Commissioners,” he said.

Asked about the jailing of Wayne Dundon for the murder of Roy Collins, Ed said he knew Mr Dundon’s grandmother, father, mother and other relatives while he was working as a garda in Limerick City back in the sixties. Part of his work as a school inspector involved trying to get his father and uncles to go to school – a feat that one of the Dundons reminded him of when he had a few drinks in his pub years later.

He believes the current set of Limerick criminals learned how to engage in serious crime from their time in gangs in England before returning to the Treaty City.

“I have great time for the honest Limerick genuine person. There was a great Kerry detective, big Gerry O’Sullivan, who knew everyone in Limerick and their relatives and let a few off with minor crimes as part of the give and take, to build up a proper relationship. There is no give and take with the current bunch of Limerick criminals. They are bad news,” he said.

After retiring in 1989, he bought a licensed premises and settled down at the edge of the village on the Broadford road. He still lives there with his wife, Eileen (nee O’Callaghan) from Feakle.

For over a decade, he became a type of social worker interacting with and trying to address locals’ concerns and issues in Ginivan’s.
Tragedy struck for the couple in 1992 when their son, Eamonn (31), who was in charge of the press arrangements for the Olympic Village in Barcelona, died following an accident. Their second son, David, who is based in Cheshire, England works as the global public relations director for Astrazeneca.

A staunch Fianna Fáil supporter, Ed never contemplated leaving the party even when it became a toxic brand after the arrival of the Troika during the dying days of the previous government. Acknowledging the Fianna Fáil-led administration made mistakes, he believes it is now time for the party to stop apologising and draw a line in the sand.

“The branding of Fianna Fáil was a bit over the top because we had a recession everywhere. The banks didn’t tell the truth. If FF didn’t bail out Anglo Irish, every Credit Union in the country would be crucified leaving the small honest  punter in a bind.

“The present Government are using Fianna Fáil policies. No one came up with a credible alternative in relation to what FF did at the time,” he said.

“Some people who got  a lot from the party and knew they were not going to be elected again just disappeared.

“There are a few young FF senators and councillors who have the potential to become very good Dáil deputies,” he added.

Charlie has his paws on Bridgetown Show