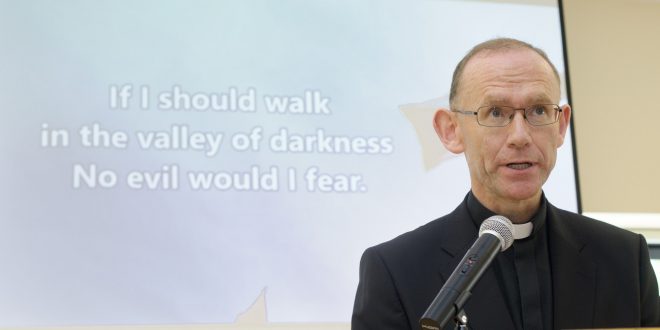 Forty-nine-year-old Fr Fintan Monahan was appointed Bishop to the Diocese of Killaloe on Friday morning (July 29), a see that had been vacant for more than a year and a half.

At the same time, His Holiness Pope Francis accepted the retirement of Bishop of Galway, Kilmacduagh and Apostolic Administrator of Kilfenora, Martin Drennan, on grounds of ill health and on medical advice.

Fr Monahan has been chaplain to St Jarlath’s College and Tuam diocesan secretary for the past 10 years.

His Holiness Pope Francis appointed Fr Fintan Monahan as the new Bishop of Killaloe at midday in the Vatican, 11am Irish time.

Fr Monahan spoke at the Cathedral of Ss Peter and Paul in Ennis this morning, where he was formally introduced to local parishioners. Also in attendance was His Excellency Archbishop Charles J Brown, the Apostolic Nuncio to Ireland; Archbishop Kieran O’Reilly, Archbishop of Cashel and Emly (and formerly Bishop of Killaloe); Bishop William Walsh, Bishop Emeritus of Killaloe and Fr Des Hillery, the Diocesan Administrator of Killaloe Diocese.

Fintan Monahan was born in Tullamore, County Offaly, on 23 January 1967. His parents are Tom and Peg Monahan and he has one brother, Seán, and one sister, Caitríona, who is married to Dominic. From 1980 to 1996, the family lived in Carraroe, County Galway, where his father was principal teacher at Scoil Chuimsitheach Chiaráin, An Cheathrú Rua. In 1996, the family moved to Castlegar, Galway City, the native home of his mother.

Fr Monahan began studying for the priesthood for the Archdiocese of Tuam in St Patrick’s College, Maynooth in 1984. He completed a BSc in NUI Maynooth in 1987, a BD in the Pontifical University in 1990, an STL in Biblical Theology in 1992 and a HDip in Education in NUI Galway in 1993.

His ordination took place in Séipéal Mhic Dara, An Cheathrú Rua on June 16, 1991. While studying for the HDip in Education in Galway, he was curate in An Tulach, Baile na hAbhann, Conamara from 1992 to 1993. From 1993 to 2006, he taught science, Irish and religion at the diocesan college, St Jarlath’s College in Tuam, along with coaching basketball and hurling.

In 2006, Archbishop Michael Neary appointed him chaplain to St Jarlath’s College and diocesan secretary. During that time, he also worked in the area of communications, vocations promotion and served as editor of the Tuam Diocesan Magazine, New Dawn. In recent years he joined the Communications Council of the Irish Episcopal Conference.

Fr Monahan is a fluent Irish speaker and enjoys the outdoor life, hill walking, jogging, cycling, swimming and gardening. He is also prolific on Twitter, a point noted by Archbishop Kieran O’Reilly, who had been bishop of Killaloe until January 2015, in welcoming the appointment of Fr Monahan.

“I know from my time as Bishop of Killaloe that Fr Fintan will receive a warm welcome and that the people of the diocese will keep him in their prayers. Fr Fintan brings many gifts with him to his new role. Having worked for many years as diocesan secretary, he is familiar with all that comes with a busy diocesan office,” he said.

“In addition to his work in promoting and encouraging vocations to the priesthood, Fr Fintan is recognised as having invested much energy and leadership in the area of communications and especially in the area of digital media. Fr Fintan’s gifts and experience will no doubt make a valuable contribution to the Diocese of Killaloe and to the Church in Ireland. I look forward to working with Bishop-elect Monahan in the future in the Irish Bishops’ Conference,” he said.