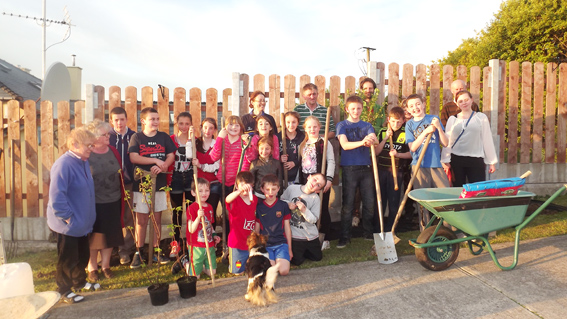 A Scariff youth group were busy last weekend, helping their local Tidy Towns group and residents of the Connaught Road housing estate, create their very own Garden of Eden.
Members of My Time Foróige Junior Youth Club joined with the Connaught Road Residents Association, Scariff Tidy Towns and the Irish Seedsavers Association to plant apple trees and fruit bushes provided by the Garden of Eden Project.
In September 2013, the new Foróige youth club came into existence, catering for 10 to 12-year-olds, and has been going from strength to strength in the past eight months.
Youth club leader, Tracey Doyle outlined how the group came about and what they have been involved in.
“I’m involved with the older group, Scariff Foróige Youth Club, and they will be 10 years next year. This group is for 12 to 18-year-olds. My Time Foróige Youth Club was born out of many knocks at my front door, by people suggesting I start something for children. We ran a summer camp last year, to see what the interest was among those between 10 and 12, as Foróige had just started supporting junior clubs, specifically catering for that age group. We had lots of children attend and, out of that, we started a Foróige junior club last September. The juniors are all from the East Clare area and we have children from Tuamgraney, Bodyke and Scariff,” she said.
The ethos of Foróige is focused on empowering youth and enriching communities into practical achievements by young people at local level. The Scariff junior group is made up of 18 children and two full-time leaders, Oona Moir and Tracey Doyle. They meet each Friday, from 7.30pm to 9pm, in the Teagasc Centre in Scariff, now run by CDCL, and this facility offers endless possibilities for the group.
“CDLC kindly give us a space there to meet. It’s great because there are cooking facilities there so we do baking and cooking with them and arts and crafts. We have a huge communal space and an office space.
“Our lads are great. They came up with the name for the group themselves and we try to encourage them to set up their own committees. I often say to the older teenagers that they should come in and see the 10 to 12-year-olds; they put the adults to shame the way they can run meetings,” she said.
Their activities are all decided through discussion around a square table and, so far, they have been involved in carol-singing at Christmas, funding a trip to the Olympia Theatre in Dublin to see a pantomime. They were also involved in the local St Patrick’s Day parade and they get involved in community projects.
The latest endeavour was participating locally in planting fruit trees and bushes ,as part of the Garden of Eden Project.
The Garden of Eden Project originated as a two-fold approach to tackle climate change, firstly by growing trees with edible fruit, nuts and berries, thereby contributing to locally-grown food; and secondly, the extra trees soak up atmospheric carbon.
The concept, which began in Ennis, is designed to provide a positive, action-based solution to help reduce our carbon footprint from the heart of the community.
The youth club were happy to get involved and really enjoyed the day working to better their community.
It has also helped them form a bond with the local community groups, who are all eager to link in with the youth club again. They will work together with the local residents group to look after their garden project. The children are hopeful that, in time, they can pick the fruits of their labour to make tarts and jam at the youth club.
Meanwhile, the residents committee has also generously given a bit of land to the older Scariff Foróige Youth Club to design a garden as well.
Tracey added that she is also looking into starting a newgroup, which will be primarily focused on the performing arts.
“We are running a one-day workshop, tying in with National Play Day in July. We applied to Clare County Council to buy a unicycle because there are a few people in the area very interested in circus skills and street performance. We are running a one-day taster workshop on juggling and riding a uni-cycle and we hope to attract a different group of young people.
“The aim of that workshop would be to get a different group going who would be able to perform at different festivals,” she said.
This street performing group would be open to 12 to 18-year-olds and the workshop will be held on July 6.
Both youth clubs are open to new members from September.
To find out more, contact Tracey Doyle on 085 8141046.