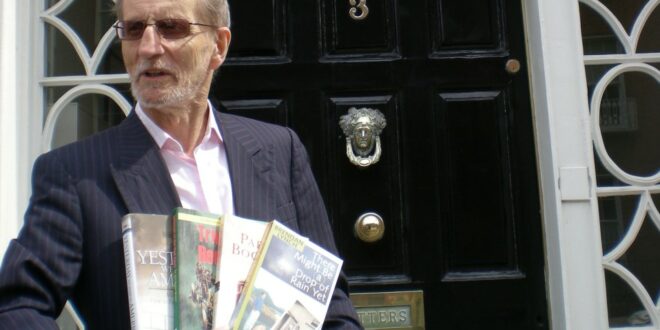 A FASCINATING novel on the fortunes of an Irish man who fought in World War One has just been published by a man with strong East Clare revolutionary roots.

Dubliner Brendan Lynch is the son of a Scariff native and spent many happy summers in the Banner County.

Brendan Lynch is the author of nine books to-date, and The Old Gunner and his Medals is his first novel, which he has published at the age of 80. A former racing cyclist and driver, railway clerk and journalist, Brendan was imprisoned in the 1960 for his activities with the Campaign for Nuclear Disarmament (CND).

His books include City of Writers, inspired by his acquaintance with Brendan Behan and JP Dunleavy. Author Colum McCann said of the book that that it showed “the who, what, where, when, how and why of a place that is built on the intricacies of language”.

Brendan’s interest in history is probably inspired in part by his mother’s closeness to key figures in the War of Independence in Clare. As a young woman, she knew Alfie Rogers, one of the four men who would become known as The Scariff Martyrs, after being brutally shot on the bridge in Killaloe in November 1920.

“My mother’s name was Siobhan Moore,” he said. “Her father, Denis, was in charge of Sparling’s bakery in Scariff in 1950s. She taught in Bodyke school but left in 1927, after marrying Patrick Lynch, my father, a Garda Sergeant, who was then transferred to Passage East. Alfie Rogers was the first man she ever danced with, his death was a big shock to her.”

The Old Gunner deals with the experience of the men who chose to fight in the British Army in 1918. The fictional character of Gunner is based on a man called Dan Doherty, who Brendan knew as a boy growing up in Dublin. Wounded and shell-shocked, Gunner Dan lived with a deep and brutal legacy of his war-time activities.

“I was unhappy with the way he was treated by some,” Brendan said, “and impressed with his love of nature and appetite for life, I often thought it would be nice to pay overdue tribute to him in a book. So, as soon as I completed last year’s Yesterday We Were in America, to mark centenary of Alcock and Brown’s first non-stop Atlantic flight (which landed in Clifden), I decided it was time at last to go to work on Dan. One-and-a-half years later, The Old Gunner is the result.”

The novel deals with a topic that is not without controversy, and certainly divided Irish people in the years after the First World War. Though Gunner Dan was himself a nationalist, he was beaten up and forced to bury his medals. His wit and zest for life enabled him to survive until saner times returned. He never lost hope of retrieving his decorations. And, after 30 years, he becomes a village celebrity when he finally unearths them, with the help of a schoolboy who appreciated his sacrifices and stories.

“It was a troubled time, there were atrocities on all sides,” Brendan  insisted. “As with all wars, one of the first casualties was truth. The Old Gunner and His Medals takes no sides, it is about the tribulations of an individual caught up in the maelstrom. It is based on a real character, who regularly ran shouting through the night streets, trying to escape his war nightmares.”

In his later life, Dan achieves hero status. “Children who had mocked Dan’s limp and threadbare clothes now followed in the wake of his pipe smoke,” Brendan said. “He was interviewed by the local newspaper correspondent. A meitheal of locals repainted his house and replaced his battered delph and saucepans.”

A long and varied working life has taken Brendan from Ireland to England to South East Asia, but East Clare remains close to his heart. His father’s career as a Garda took him to the capital and holidays were spent west of the Shannon.

“We always went to Scariff on holidays in 1940s and ‘50s,” he said. “Lots of fishing and my grandfather let me bake bread in Sparling’s bakery. Scariff was a very lively town then, with fair days and markets – which will feature in memoir I hope to issue next year!”

An issue that concerns Brendan is the maintenance of the bridge area. “There are lovely views from the bridge, which have now been destroyed by trees and overgrowth which are a disgrace to the town,” he said. “Why do not the tourist folk or locals do anything about this desecration?”

Described by best-selling author Jilly Cooper as “a heroic and touching story,” The Old Gunner is available from Hodges Figgis, Dublin, or directly from Mountjoy by emailing mrg_lynch@yahoo.ie.

Fiona McGarry joined The Clare Champion as a reporter after a four-year stint as producer of Morning Focus on Clare FM. Prior to that she worked for various radio, print and online titles, including Newstalk, Maximum Media and The Tuam Herald. Fiona’s media career began in her native Mayo when she joined Midwest Radio. She is the maker of a number of radio documentaries, funded by the Broadcasting Authority of Ireland (BAI). She has also availed of the Simon Cumbers Media Fund to report on development issues supported by Irish Aid in Haiti. She won a Justice Media Award for a short radio series on the work of Bedford Row Project, which supports prisoners and families in the Mid-West. Fiona also teaches on the Journalism programmes at NUI Galway. If you have a story and would like to get in touch with Fiona you can email her at fmcgarry@clarechampion.ie or telephone 065 6864146.
Previous Out-of-hours GPs needed now more than ever
Next Injury Blow For Clare Ahead Of Munster U20 Hurling Campaign