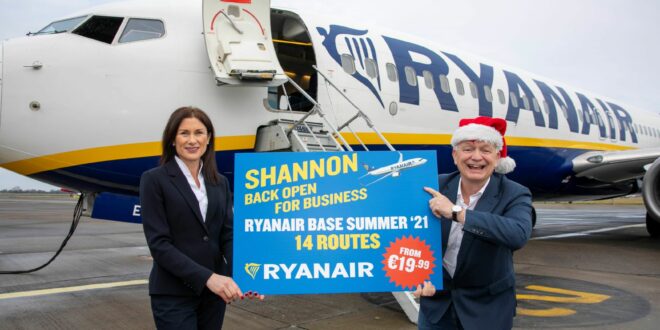 Shannon Group executive officer, Mary Considine and Ryanair CEO Eddie Wilson at the re-opening of Ryanair;'s Shannon base next April.

RYANAIR has delivered an early “Christmas present” to Shannon Airport following its decision to re-open its base with one aircraft and the recommencement of 14 routes from April 1.

According to Ryanair, a new five-year deal on airport charges, which was finalised between the Shannon Group and the airline in recent days, will create more than 330 direct and indirect jobs.

Last October, Shannon Airport was dealt a hammer blow when Ryanair announced it was closing its Shannon base for the winter months.

With transatlantic closed down already and the Shannon-Heathrow route also suspended, Shannon Airport only has a very small number of scheduled passenger flights per week.

In an interview with the Clare Champion, chief executive officer, Mary Considine confirmed the Shannon Group has been in discussions with Ryanair since April initially to try and maintain services at a reduced level and unfortunately when Covid-19 continued the company decided to close its base for the winter, which she described as disappointing.

Asked if the new five-year deal involves lower airport charges, Ms Considine said it comprises of “incentives”, which other airports also use to restore the services that were lost due to the pandemic, and ultimately these incentives are designed to help Ryanair grow their base in Shannon.

She described the new deal, which sees the return of 32 weekly flights,  as an early “Christmas present” and is a very positive end to what has been an extremely tough year for the airport and aviation.

Before the pandemic, Ryanair used to operate two aircraft from its Shannon base before scaling back services substantially due to the devastating impact of Covid-19.

Deputy Michael McNamara welcomed Ryanair’s commitment to Shannon and hoped the government will display the same commitment to the airport and aviation policy in general.

Fianna Fáil’s new Spokesperson on Tourism and Aviation Deputy Cathal Crowe said this is the “best news we could have wished for” given how badly Shannon Airport has suffered this year.

In a statement issued to the Clare Champion, Deputy Crowe said Ryanair’s commitment to Shannon will secure and support more than 330 direct and indirect jobs in the Mid-West at a time when many of those workers have been uncertain as to what the future will hold.

“As Fianna Fáil’s newly appointed Spokesperson on Tourism and Aviation, I will fight night and day to ensure going forward, once the Covid-19 vaccination has been rolled out and we are finally on top of this horrible virus, that we have a strong, sustainable international airport here in Clare.

“In the few days since my appointment, I’ve been busy talking with the likes of Fáilte Ireland, hoteliers and other industry experts and there is hope on the horizon for summer 2021.

“I’m very cognisant that today’s good news comes on the back of bad news, with the country slipping back into Level 5 restrictions once again.

“This has been a horrendously tough year on all of us and many sectors have been ravaged by the tsunami of Covid-19,” he said.