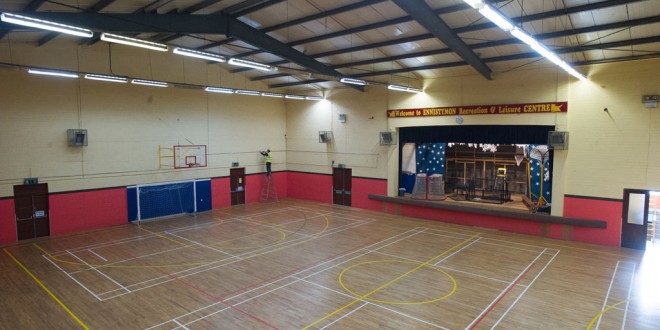 A general view of the main hall inside Ennistymon Community Centre. Photograph by John Kelly.

A MAJOR row about Ennistymon Community Centre rumbles  after it emerged that its annual general meeting was held in private, despite calls to open it to the public.

The newly-formed Ennistymon Community Action Group accused the board of the centre of “ignoring” their call for their AGM to be held in public.

The group organised a public meeting at the beginning of last month, at which a resolution was passed calling on the directors of the community centre company to hold a general meeting in public on Thursday of this week.
However the AGM, the former chairman of the centre told The Clare Champion, was held last week, with seven people in attendance.

John Garrahy, former chairman and current manager of the centre, explained that the members are made up of the founders and directors of the organisation.

“The centre is a limited company by guarantee. We are not obliged to hold a public AGM. We have never held a public one before. We took this up with our solicitor. Our members, as I understood it, were the original committee who came together to set it up. When it was being set up, people were running in all directions; they didn’t want to sign up to anything. Some of those members became directors of the company. Some of those original members are long gone now,” he explained.

A statement from Ennistymon Community Action Group claimed it is “very disappointed” that the resolution from the February 2 meeting was not acted on by the community centre’s board.

“The Ennistymon Community Action Group hoped that the AGM/EGM would give the board of Ennistymon Parish Project Community Centre (EPPCC) Limited the opportunity to engage with the residents and have a discussion on the operations, as well as on the vision for the community centre.

“The group feels this is a wasted opportunity for the board of EPPCC Ltd to move forward in a spirit of openness, transparency and inclusion.

“The Ennistymon Community Action Group cannot understand why the wishes of the people are being ignored, considering that the centre was built by the people for the people of the parish,” the statement concluded.
Stephen Leigh, PRO of the group, described the holding of the AGM in private last week as “a pity” before confirming that the action group committee would meet next Tuesday to discuss their options.

Mr Garrahy stated that last week’s AGM was quorate and that seven out of a possible eight members attended. The board maintains that “absolutely nobody is excluded from the community centre”.