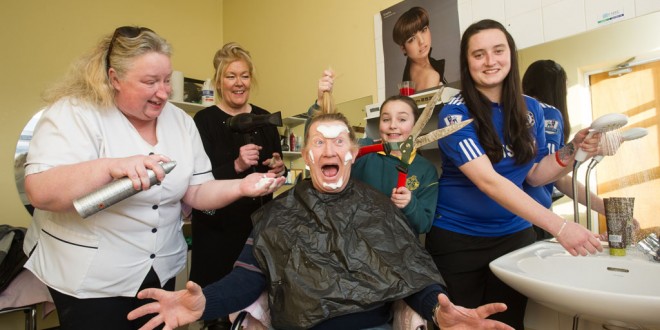 Anne’s crew remember her to Rapunzel

STAFF members in St Joseph’s Hospital are planning a ‘crew cut’ for a fundraising event in memory of their former colleague, Anne Fox, who lost her battle with cancer in September 2013.

Three of Anne’s former colleagues are stepping forward for the short back and sides by hairdressers from K&G Hair Salon on Parnell Street, at the function in O’Keeffe’s Bar, Lifford, on February 27.

But that’s not all. The group, and the 10-year-old niece of one of the volunteers and the daughter of another, will then hand over their tresses to the Rapunzel Foundation to make into wigs for children and adults who suffer from alopecia.

Tommy Guilfoyle, Deirdre Allan and her daughter, Mary, who works in Ryan’s Centra, and St Joseph’s colleague, Nuala Casey haven’t had a haircut since last April or May.

Tommy’s niece, Ava Burke, aged 10, a pupil in Gaelscoil Micheál Chiosóg, has never had more than a trim. Now she’s prepared to have 14 inches cut off, the minimum needed by the Rapunzel Foundation in Ireland – in a wish to help some other young person to have a better quality of life.

“I just think cancer is a horrible disease and I can’t imagine waking up with no hair. I have a lot of it and I’d like to donate it to a girl that hasn’t any,” Ava said.

“I liked the idea because some people don’t have as much hair as I do and I can just give it to them. My hair will grow back very fast but theirs wouldn’t. Some of my friends in school think it’s a nice thing to do but some just don’t want my hair to be short, they like it long,” Ava added.

“They need 14 inches in Ireland,” her uncle, Tommy, explained. “In England, the foundation takes it at seven inches, so there’s a good possibility that mine might go to England, but that’s not saying it won’t come back to Ireland,” he said of his flowing fair locks.

“Our work colleague, Anne Fox, was diagnosed with cancer and she left us in September 2013,” said colleague and life-long friend, Deirdre Allan.

“We were all a very close-knit group at work and we had worked together for years. I’d often joked with Anne that we’d be working together for another 20 years, but we’d have been quite happy. She was a fantastic person, really and truly. But unfortunately, it was as it was,” Deirdre said.

Anne’s friends felt really bad that there was no way they could help her in the depths of her illness and that she was taken from her family and friends much too early.

“We had no way of helping her. We had no way of stopping it; we just had no control and it was a horrible, horrible feeling. It really affected us all. We didn’t want Anne to be gone and we want to keep her memory alive,” Deirdre said.

“One of the good things that happened through all her illness was Sláinte an Chláir in Kilnamona. But the nature of her illness was that she didn’t get much time there. When she went there, though, she really did enjoy it.

“Speaking to other people around the town and the county, a lot of people have got great comfort at the centre, that little extra bit of strength that they needed at a time when things are very low in their lives. Then our Tommy came along with the idea of the fundraiser,” Deirdre added.

“We decided we’d do something for Sláinte an Chláirand we’d grow our hair and donate it. Every time we went into Kathleen and Geraldine in K&G Hair Salon on Parnell Street, we’d ask them, is it the right length and they’d say, no keep going, keep going. I thought it would only have to be a small piece but this has been growing since about last May,” Tommy explained.

“Eventually, we got the name of the Rapunzel Foundation. If we’d known about this, we could have done it years ago to help people who need wigs, like cancer patients and someone with alopecia. I’d love to have done it before,” he said.

Deirdre recalled that when Anne was going through her treatment, it was a really, really tough time, but said that one of the funniest times was when she was getting the wig.

“She had such fun with the wig, trying it on and trying on different ones and she’d have her wig for going out. She was never truly bothered about losing her hair but a lot of people are and really suffer. Donating the hair is fantastic, especially Ava’s hair,” she said.

The double fundraiser of funds for Sláinte an Chláir and the hair for the Rapunzel Foundation will take place in O’Keeffe’s Bar on Friday night, February 27.

“The hair-cutting will take place between 9pm and 10pm and everyone is invited along to support the event. If anyone would like to donate seven or 14 inches of hair themselves, they should contact Tommy at St Joseph’s. But be aware that only uncoloured and untreated hair is accepted by the foundation.

“I’ve to go and get my hair washed and, believe it or not, straightened, on the day. It can’t be shaped, and then I’m off to get a number one haircut,” Tommy said.