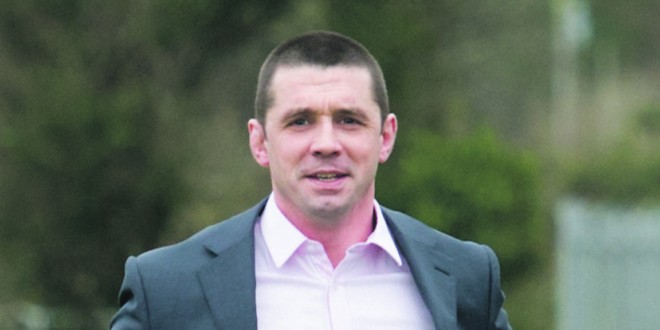 FORMER Munster and Ireland back-row forward, Alan Quinlan was on hand last Sunday to help launch the third Hurley-Hoey 10km run and walk, which will take place on Saturday, March 7 at the St Joseph’s Doora-Barefield GAA complex in Gurteen. The fundraiser is in memory of the late Eilish Hurley and Ger Hoey, both of whom were members of the GAA club.

This year, the proceeds will be donated to Hospice Jinja in Uganda, which was founded by and is run by retired doctors, Frank and Patricia Hassett. The other charity to benefit will be TLC4CF, which is continuing to fundraise to provide and equip a Mid-West cystic fibrosis centre in Limerick.

Alan Quinlan said he was impressed by the voluntary effort behind the event, which he has supported since its inception.

“I was blown away a couple of years ago to see how the whole community got involved. It’s a huge voluntary effort and I’m amazed again to see that there will be events held in London and Sydney as well.
“It sends out a clear message that life can be tough at times but people and communities come together. I’m sure it gives the families a good lift every year that people can and do remember those who have passed on,” the Sky Sports rugby pundit said.

The 27-times-capped Tipperary man spoke in more detail on rugby issues, following the fundraising launch. There was, of course, only one issue up for disussion: Munster rugby. While Munster hammered Sale in Thomond Park on Sunday, they were already out of Europe. This is just the third season in 17 years that the 2014 semi-finalists did not make the knock-out stages.

“It’s getting tougher in Europe, there is no doubt. When you have so many players with experience who retire and move on, it’s always going to be difficult for any team. I played for so long for the team, I want them to be more competitive and I want them to be competitive. Europe is getting much harder.
“I think my comments last week were really trying to say that maybe there needs to be a different look at things. I’m not saying I have all the answers either,” he said, with reference to his views in the aftermath of Munster’s exit from the Champions Cup.

Quinlan pointed out that he lost plenty of games himself, early in his career.

“We lost a lot of games at the start of our run in Europe as well. I don’t have all the answers but when you have five slots for recruitment, we have to make sure that those five guys are of top quality. At the moment, we have three project players and they’re very good young players and possibly going to play for Ireland but what Munster needs now is a couple of big names with experience. There are a lot of good young players coming through but Europe is a very unforgiving place at the moment. The standard has increased, competitiveness has increased and it’s very close to test match rugby. You’re playing against a lot of seasoned internationals,” he pointed out.

Quinlan feels the tenuous link between the province and schools rugby is not helping Munster.
“There are only four Munster guys on the Irish U-20s which is a bit of a disappointment. There is a divide between schools rugby and Munster rugby down in Munster. I think it’s terrible that they don’t work together. Schools want to run their own system, whereas it’s a smooth scenario up in Leinster, where all the schools are on board. They’re all doing the same development, skills and training programmes. That gives you continuity but it’s a numbers game too. Munster rugby is always going to be there or thereabouts but I just want them to be at the next level and see if they can stay at that level.

“The success that the team has had over a 10-year period has brought a certain amount of pressure and expectation. It’s not as if there are dire straits. There are a few subtle changes that need to be looked at,” Quinlan believes.

He feels that the PRO12 league is decent but accepts that French clubs in particular are better-financed than Munster.

“Any of the PRO12 teams in a once-off game can beat anyone, I think. It’s just that consistency and a little bit of depth in the squad probably needs to improve. Europe is like the FA Cup. You can shock teams and get up for one-off performances.

“But there is a danger when that money is being bandied around in France that guys’ heads will be turned and, if Toulon came knocking on the door for any player, it would be hard to say no. You’d be living in the south of France on a big salary and the chances are you’re going to win things.

“The big advantage here in Ireland is that you don’t play as many games. You’re playing with your own guys in your shirt and the values that carries. No money can match that,” he maintained.

Despite their poor displays in Europe this season, Quinlan is adamant that Munster can emerge stronger in the coming seasons.

“I think Munster has done remarkably well to get to the last two semi-finals. But it just didn’t happen against Saracens last week and the game in Thomond Park against Clermont was very disappointing. It was an incredibly tough group as well.

“I think there are a lot of good things happening in Munster rugby. It’s just a case of getting better and, to get right up there, you have to be smarter with your money and recruitment,” is his take on where Munster go from here.